DEFENDER OF THE FAITH by Damien Reid and John Crawford 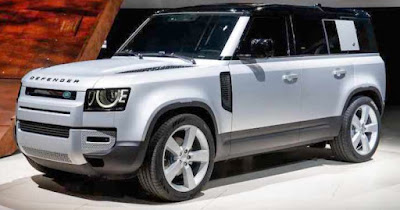 In the 12 months since we first saw the new Land Rover Defender the reviews appear to be confirming that the latest ‘glammed-up’ Defender is the bee’s knees, and more than achieves favourable comparisons with its mighty predecessors, the 90 and the 110.

My first reaction was: “No, sorry, it’s not the real thing.” You wouldn’t use the garden hose to flush the mud and dirt out of interior, and the luxurious fabrics and electronics will fail the ‘practicality test’, but I seem to be in the minority.

According to my good friend Damien Reid, who’s now based in Dubai, the chance to run the new Defender through its paces in the sand dunes near Mleiha was almost proof enough that Jaguar Land Rover has produced a vehicle which can ably defend its predecessor’s mighty reputation for practicality and competence in the hard slog off road and along barely-formed tracks.

However, according to Damien, a session behind the wheel and afterwards with the product specialists informed the extent to which the product planners and designers were really cognizant of the challenge ahead of them. I’ll let him take over here: 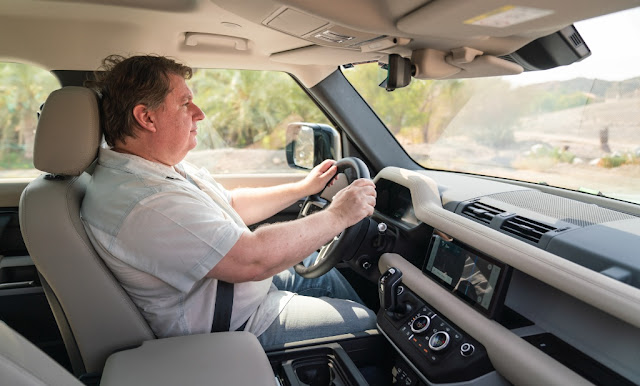 Land Rover has taken a different approach to the renewal of its landmark off-roader, making it more suitable for the modern world with updated styling, a more-welcoming cabin and a major change from an old-school body-on-frame package to a car-style monocoque. It is also crammed full of modern electronics and safety equipment so it will do the school run while still being a highly capable off-roader. 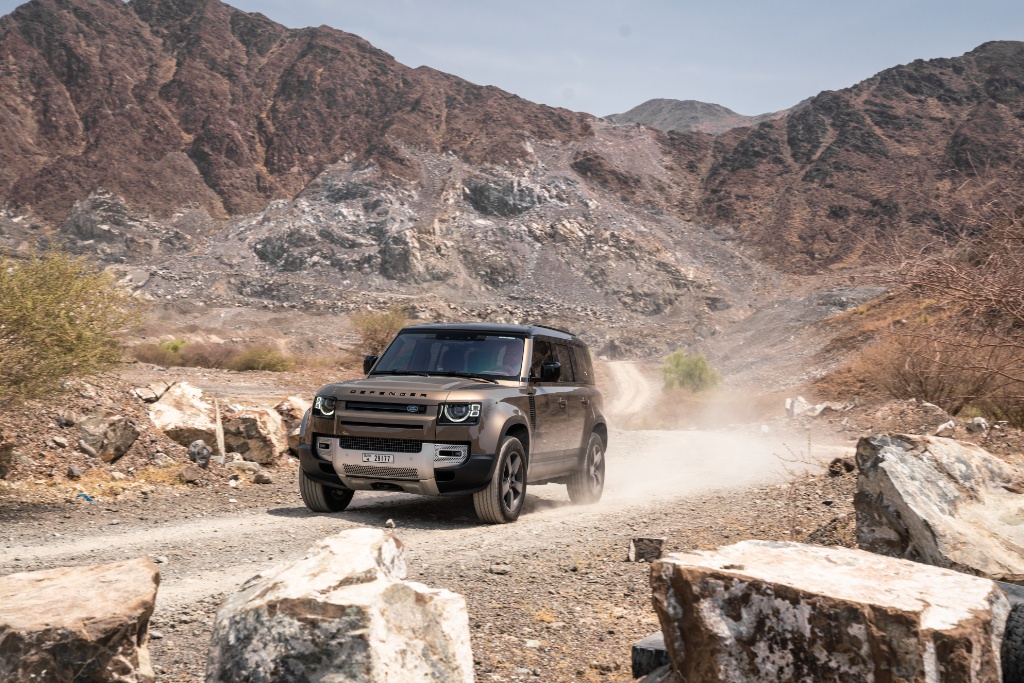 Normally, the only cars you see in the sand outside Dubai are camouflaged prototypes undergoing hot weather testing, so it’s fitting that we should now throw the 4×4 with the toughest reputation in the business into the fire.

Desert driving requires high revs and low speeds which is why this region is a prototype testing hotspot. It punishes the cooling system with the heat and lack of airflow from the slow-speed running, as well as the constant fear of sand blocking the radiators. 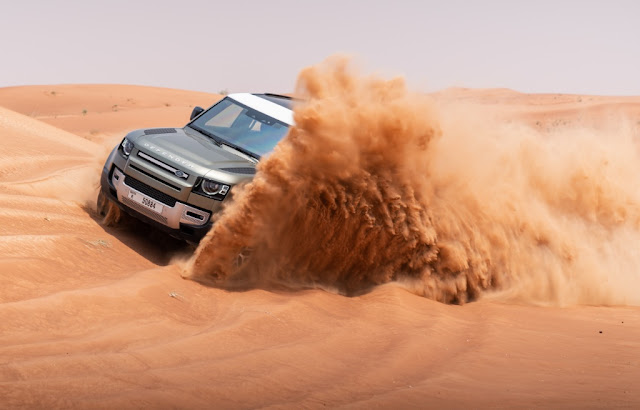 Riding on 20-inch alloys, tyre pressures are dropped to save rolling a tyre off the wheel, which can happen with a bit of dune surfing, and it’s time to go.

Straight away, the new Defender is, without question, better than the original in these conditions.

We started out at the Jumeriah Creekside Hotel, just behind the Al Maktoum airport, and then drove East-South-East into the Emirate of Sharjah, on the road through Al Awir, on the outskirts of Dubai, and towards Al LIsali.

Then headed towards the Al Madam area and skirted the Omani border up to Shawka. We played in the dunes and rock escarpments around Mleiha archaeological site, and Fossil Rock, but it was too hot in July to go any further, because temperatures were already in the mid-50C's, so after lunch we headed back to civilisation. 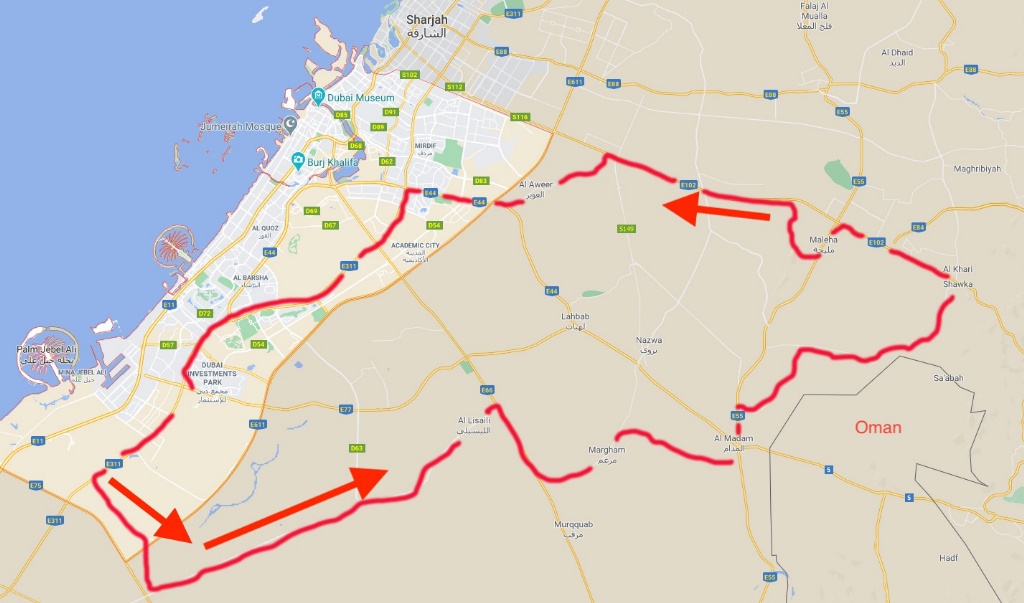 Slipping the familiar Terrain Response system into sand mode, 85 ECUs go to work to almost guarantee you won’t get stuck. 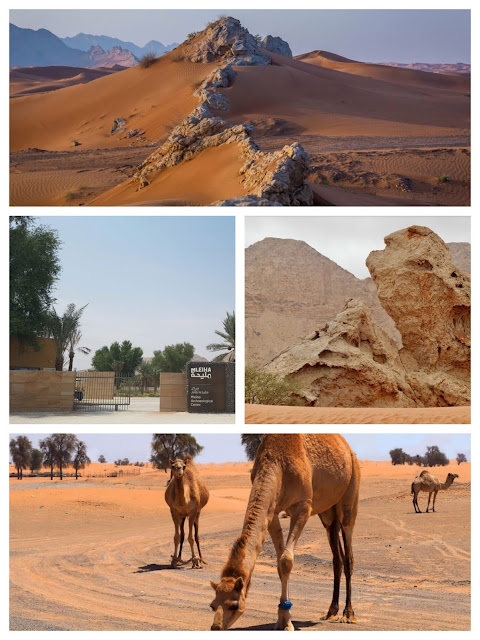 Given where we are, I cannot vouch for its claimed 900-millimetre wading depth in water, which is 400 more than the old Defender. Nor can I confirm that the electrical system can be submerged for up to an hour.

While it’s obvious there will be comparisons made to the Jeep Wrangler and Gladiator for their utilitarian capabilities, the Ford Bronco - for who does retro best, and even the copycat Grenadier, it’s clear the new Defender is not trying to be the old one.

TheDefender performs faultlessly in the sand, and across some very large boulders.

Just like its quirky and boxy exterior, there are more references to the old Defender inside including exposed screw heads on the door trim, and aluminium kick panels.

Of course it wouldn't be 'British' without a few slashes of woodgrain trim, as you'll spot, encircling the door panel (below). However, one still gets the impression it's 'too glam' to be real. 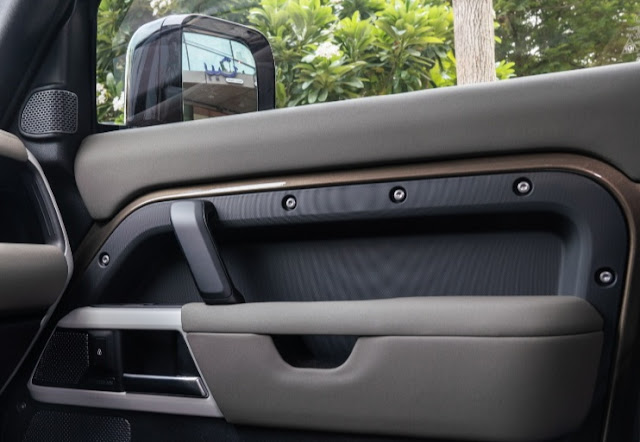 The 21st century Defender is now impressive on the road in a way that the original could never have been, and yet it retains all the off-road ability you could possibly need.