LEXUS LC500 CONVERTIBLE - FUN IN THE SUN, AT A PRICE by Paul Gover

It’s coming into summer and the proof is the Lexus LC500 convertible.

There is always a special sunshine car at the start of the season and this year it's the turn of Lexus to sit and shine. 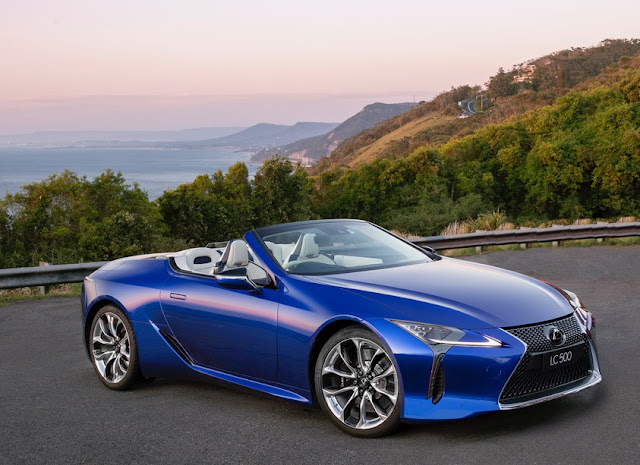 The LC is the latest in a series of open-air flagships that tracks back to the unlovely SC400 convertible from 1991, that had only its Mark Levinson sound system and folding clamshell roof to recommend it. Since then, Lexus has advanced in every way, and the latest folding roof is four layers with soundproofing, and a canvas outer.

It’s not cheap, priced from $214,000 - with a Limited Edition car boasting bold blue bodywork, and a white leather interior at $235,000 - and Lexus is predicting the open-air option will out-sell the coupe. 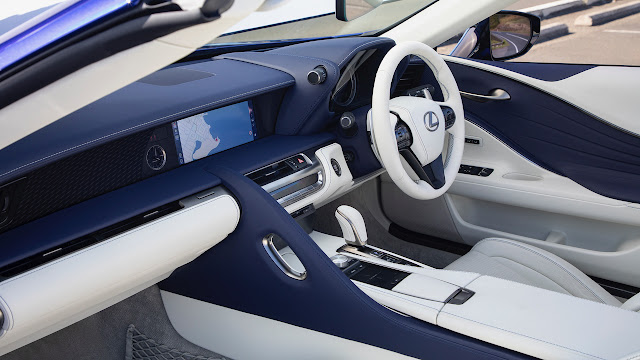 Despite the price it easily undercuts one of its key rivals, the BMW 8 Series, and is cheap compared to a Bentley or Maserati drop-top. Then again, it is ‘only’ a Lexus.

The engineering work on the Convertible is first class, and so is the equipment and final finishing. The key to the car is the folding canvas roof. It does its origami folding in 15 seconds at up to 50km/h, with a slight pause - for effect - at each end of the cycle.

It ticks all the luxury boxes, but it still has the awful haptic controller for the infotainment that flaws the whole Lexus family, but compensates with everything from a colour heads-up display, to 21-inch alloys.

Buying into the LC Convertible experience also includes three years of the new Encore Platinum Owner Benefits scheme at Lexus, which includes a pick-up-and-deliver program for servicing, and Lexus on Demand that allows owners to swap to another Lexus model at local or interstate dealerships, and major airports. So there's definately a value-add for the pricetag.

The Convertible looks almost identical to the LC Coupe, which shows the early engineering that went into the car. Only three panels are changed - front pillar, rear guards and boot-lid

There is extra strengthening steel, and additional spot-welds in the Convertible’s body structure, which delivers impressive rigidity.

The LC Convertible offers the same V8 engine, 10-speed automatic gearbox as the coupe, and of course, rear-wheel drive. But, it’s a bruiser cruiser, not remotely like a sports car, meaning the suspension settings are quite plush, while still retaining good grip and braking power. 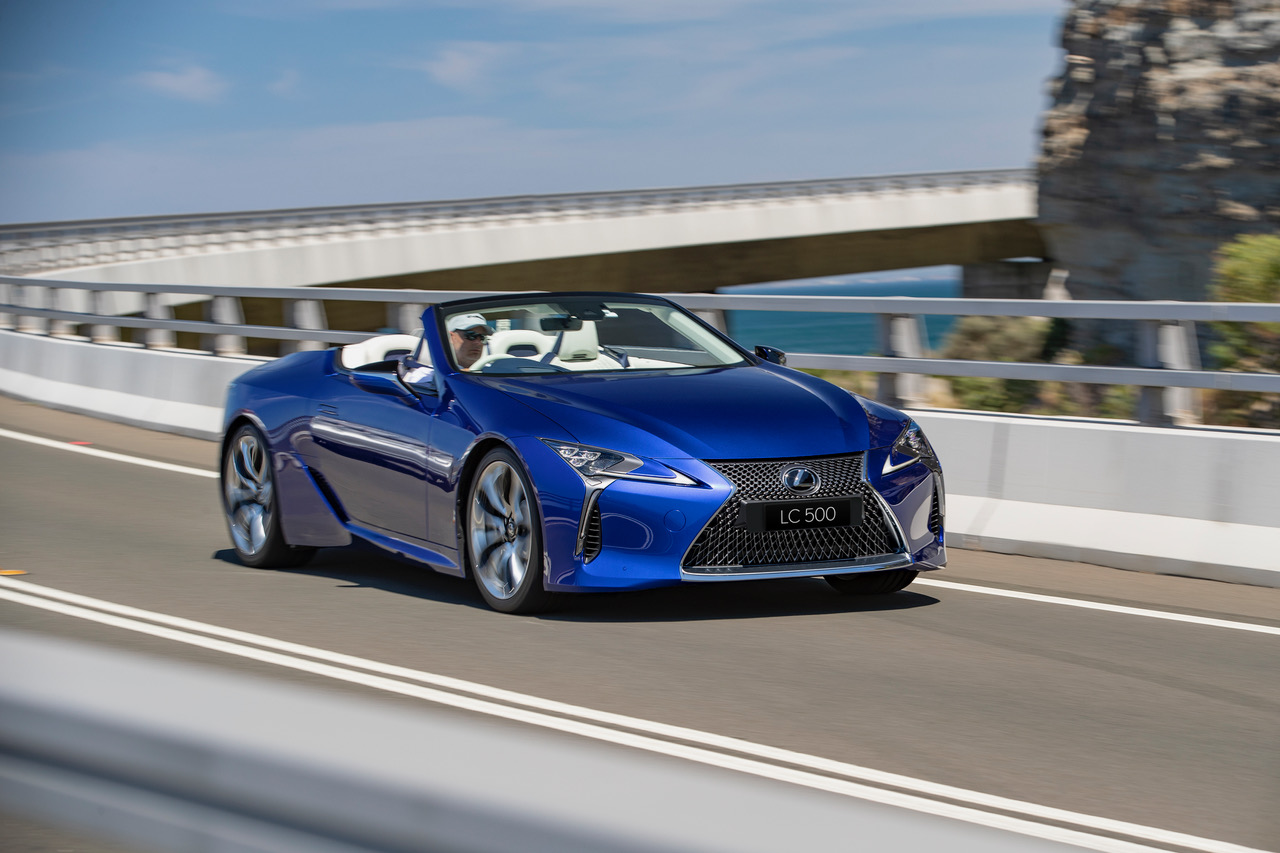 The headline numbers for the creamy-smooth engine are 351kW, and 540 Nm of torque with predictable driving modes and flappy paddles - with a slightly vague feel - for manual control.

It easily sprints to 100km/h in less than five seconds, but the best thing about the V8 is the crushing overtaking pace. It sounds good, too. But squashing the loud pedal to the floor means it’s a thirsty bugger.

The body strengthening efforts and the relatively small roof results in minimal loss of structural strength, and Lexus says its structural rigidity is almost on-par with the coupe.

Any trip in the LC Convertible is going to be cosseting and relaxing, and the driving experience is near-identical to the Coupe, although there is a slightly squidgy feel from the rear end in a few bumpy corners. However, the open-air experience is excellent, with absolutely minimal buffeting. 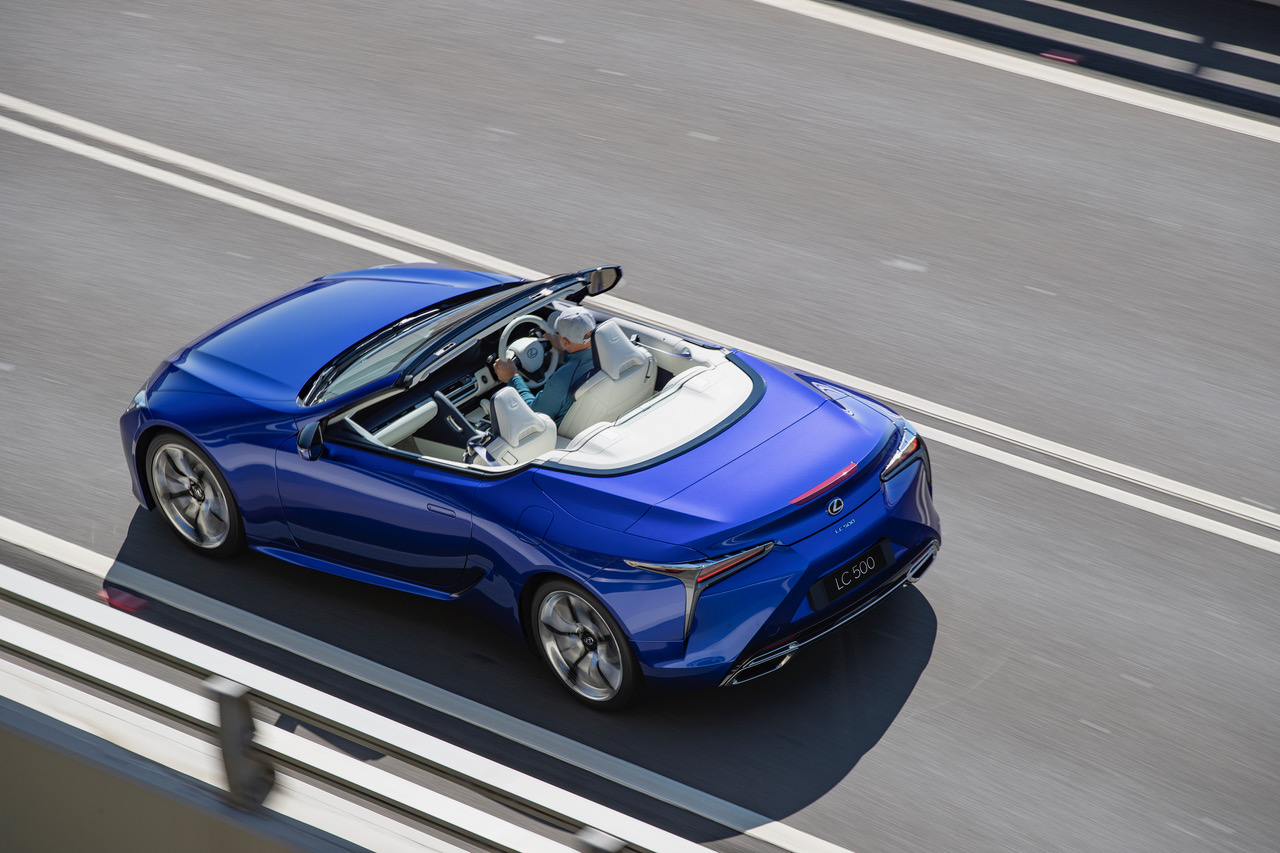 I’m not a fan of drop-tops for two reasons: sunburn and floppy bodies. But the body control in the LC is taut, and sunburn protection is only 15 seconds away.

So this drop-top Lexus is definitely fun in the sun – if you can afford it.