I am contemplating whether the term ‘supercar’ has credibility anymore.

Because of wealthy Australians’ penchant for having the latest, flashiest and most expensive toy cars we are well-served Down Under for high-performance sports cars.

We might only have one or two Paganis on the road but we’re a bit knee-deep in Ferraris, Lambos, Aston Martins, Porsches and McLarens. A dime a dozen? Not, quite, but they’re not exactly rare in Oz. 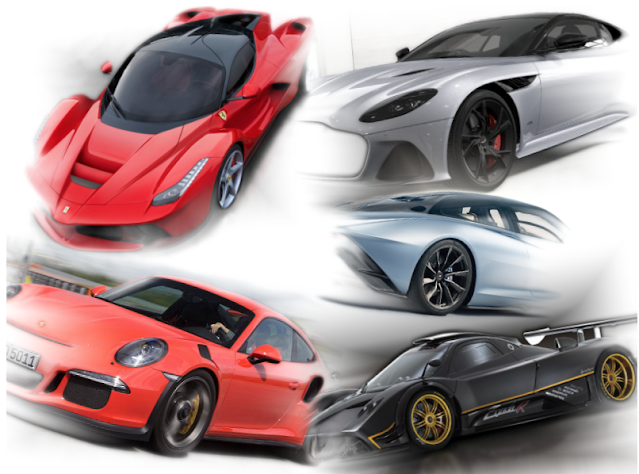 Then, of course, the Supercars title gets attached to a ridiculous motor racing series where we are expected to believe that everyday brand names - Ford and Holden - are lining up for victory laurels, when in fact it’s just a silly silhouette series where the only real differences between the cars are the engines, general shape and badges.

So, as I give back the Audi R8 – often referred to as a ‘supercar’ – the question springs to mind, what exactly is super about this expensive, rear-engined relative to the original Beetle?

That’s right, if you put the basic specs down on paper, there’s no difference between the R8 and the Peoples’ Car – except that the humble Volkswagen could at least carry four people. 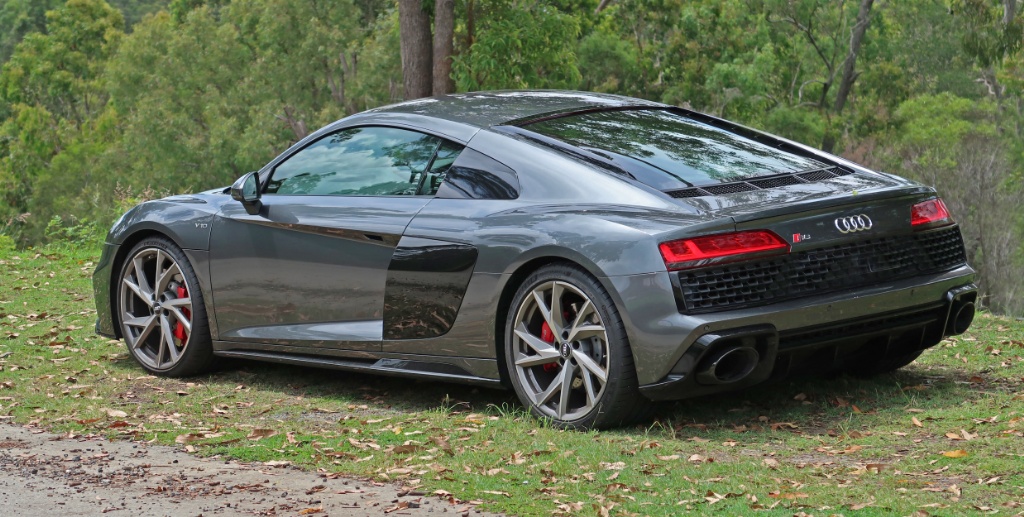 Now that’s being churlish, and perhaps stretching the family connection through the Piëch and Porsche dynasty, but AUD$295,000 is not lunch money for a new car. However, there is some good news on the financial front, because for 2021 Audi dropped the price and made the RWD R8 a permanent member of its sports car catalogue.

Don’t bother yourself with specs and performance, because the R8 has everything you need to show off, go fast, and in this country get yourself a speeding ticket quick as dammit!

The forerunner to today’s R8 was the Audi Le Mans Quattro Concept, revealed at the Geneva Salon in 2003. Interesting that the press kit photos feature only one man with the concept car – then Audi CEO Martin Winterkorn.

The ‘real’ designers were Frank Lamberty and Julian Hoenig, but apparently when the press kit was being prepared Winterkorn said he wanted only photos of himself with the car! A Big Man? Maybe not. 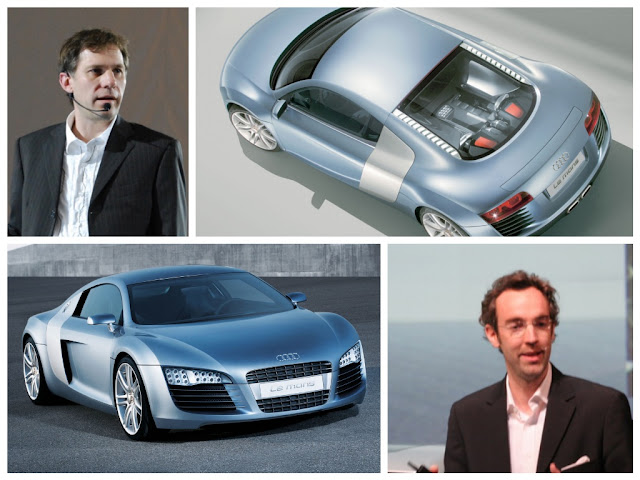 The production car appeared in late 2005 (as a 2006 model) and, so far, Audi has sold 46,000 R8s of all types worldwide, which if you average it is about 3100 cars a year - a decent number. It has maintained its popularity with high performance sports car buyers because of the integrity of its design, performance and reliability. You can also buy an open-air model and an all-wheel drive version, and there is even a GT3 racing derivative.

Despite a 15-year model run it doesn’t share the longevity of Porsche’s legendary 911 – but it’s still a pretty impressive result.

I know a little about the gestation of the 5.2-litre V10 engine because, at one point in the planning stages of the Bentley Continental GT, we were vying for the right to use the power-plant. 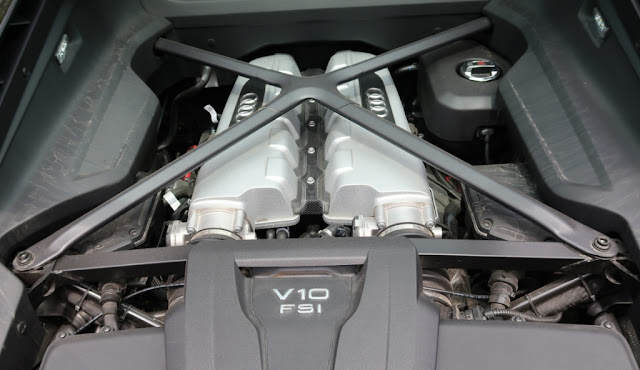 However, Audi insisted the V10 would be used only by it, and its then-new Italian subsidiary – Lamborghini. Actually, there is another strong link to the cars from Sant’Agata Bolognese.

The R8’s platform was shared with the Lamborghini Gallardo, and it’s now also the baseplate for the Huracan. And that’s not a bad addition to the R8’s bloodline.

Okay, enough about the family tree and the bloody relatives, what do we get for the money? Close to 400kW at full song of 7800 revs, but the 340Nm of torque doesn’t kick in until 6500. 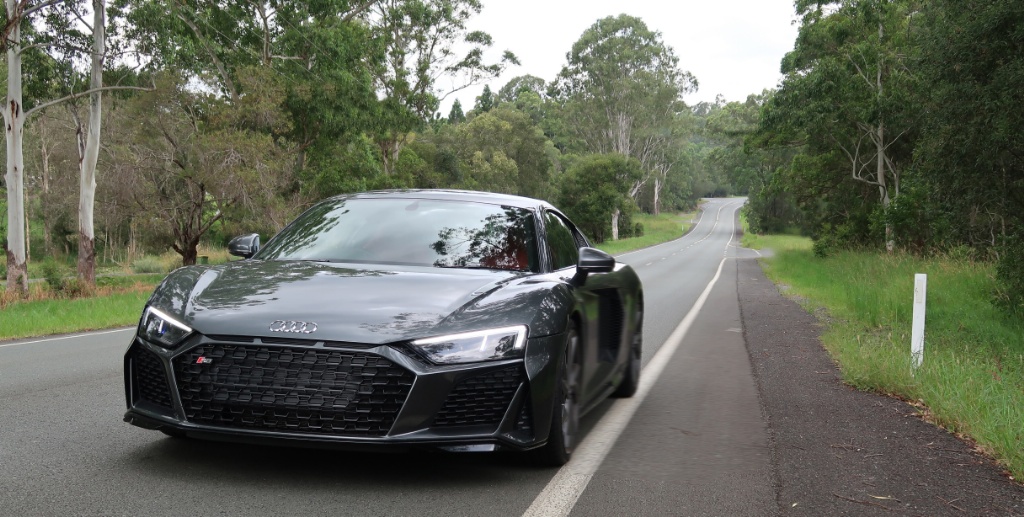 Still, that’s enough to knock off the 0-100km/h sprint in 3.7 seconds. When you’re behind the wheel with your foot flat it’s a bloody marvellous experience! As you’d expect, the throaty roar from the ten cylinders is impressive, and the changes from the 7-speed DSG transmission are snappy and slick.

So, what about the handling? Who could say this car was a ‘dud’ in this department? With its pin-sharp response from the brilliant electric steering, and its overall high adhesion levels, it’s easy to focus on the apex and power through with absolute confidence. 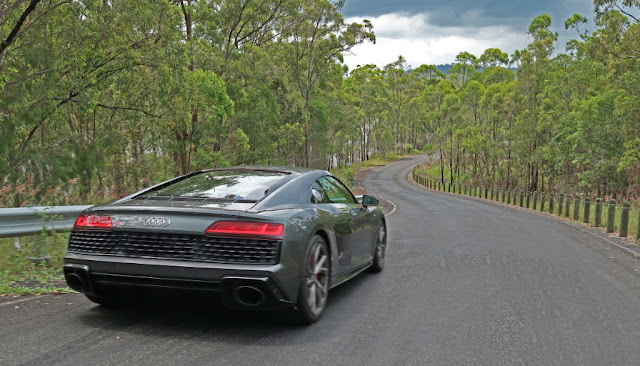 During my drive there was enough rain to make the aggregate road surface greasy and, given its power, the tail flicked out a couple of times. So it needed total concentration but, hey, it’s rear-wheel drive and not quattro. You have to expect it’s going to occasionally be a handful.

I have to say it’s not the most comfortable ‘supercar’ I’ve driven. Although the damping feels well controlled, it’s really too taut for comfort. I left the R8 with the feeling I’ll have to report to Les, my Mustang-owning dentist, to get my bridges glued back in – because they felt like they were chattering free from my jaw.

On a perfect surface, the R8 is – well, perfect. However, the secondary ride is rubbish and you begin to question just what the R8 is good for. Well, I had to counsel my good mate, Paul Gover – and we decided that probably this RWD version would make an ideal track day car.

So, only for weekends? Probably. Yep, although it potters about the traffic with little fuss, I could imagine it would be a very useful tool for a weekend track day warrior.

The cabin and general interior design and finish is excellent, and subtly tailored. The 550-watt Bowers and Wilkins sound system is superb, and the Napa leather-covered seats are very comfortable. 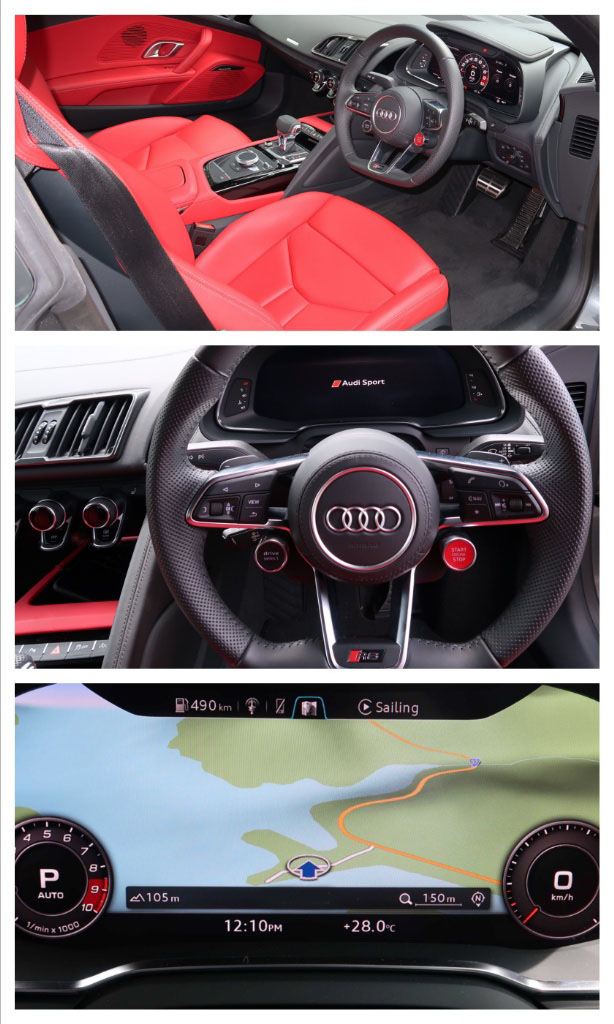 So, the R8 RWD offers supercar performance, an (apparently) good value pricetag, and the quality that goes with owning an Audi.

According to the registration data for 2020 and YTD 2021, sales are steady and in double digits, but remember this is not a shopping trolley – it’s only bought by people serious about performance, and maybe they got a good annual bonus.

Now, is the R8 profitable for Audi? A friend from the highest echelons of the VW Group says 'probably not' - it is merely the down payment on the cost of establishing Audi as a brand with sporting credentials. 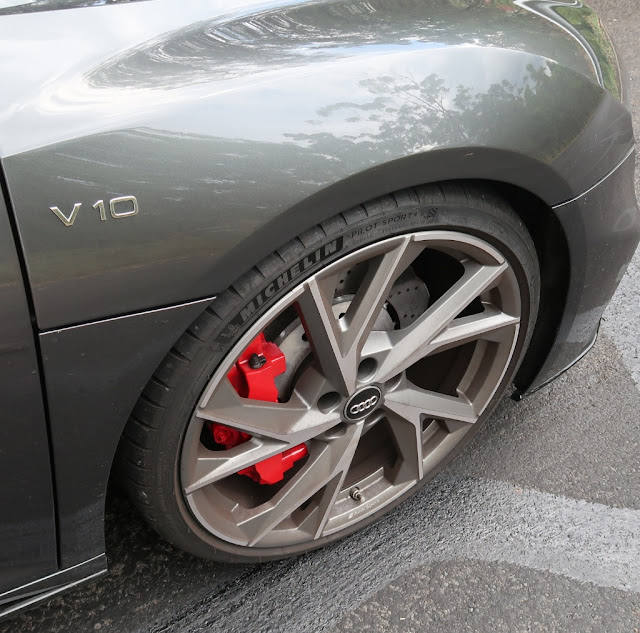 The R8 has plenty of competition in the rarefied air of the high-performance sports segment, but it has the street cred to hold its head high anyway.