PHIL & 'THE SHARK' by John Crawford

I was 18 in 1961 when two significant events occurred in Formula One, which would impact me decades later.

First, the late, great Stirling Moss won what he described as his most exciting Grand Prix to date, the Monaco GP in a Lotus 18, up against fierce competition and more powerful cars.

At Monaco that year, Hill struggled to get on the podium, and was beaten by his Ferrari teammate and fellow American, Richie Ginther, and Jim Clark in a Lotus Climax.

But, at year’s end it was the quiet, unassuming gentleman, Phil Hill, who took the laurels in a car which wrote a great page in F1 history, but of which none remain.

The Tipo 156 was wholly-designed by the great Carlo Chiti, for the change in engine size from 2.5L, to 1.5L. The beautiful, superleggera 156 featured a 120-degree V6, which you could describe as jewel-like – a gem of an engine.
However, Enzo Ferrari was the target of much criticism after an accident at Monza which killed his third driver, Wolfgang von Trips, and 14 spectators. Folklore has it, that at the end of that year Ferrari ordered all the 156s cut up, and used as reinforcing metal in the concrete floor of Ferrari’s engine test building.

So, I very much enjoyed sitting down to read the June 2021 issue of Britain’s motor racing bible, MOTOR SPORT, and a big feature celebrating the 156, and words from Phil’s son, Derek, who drove a replica 156 for the story. F1 writer Nigel Roebuck contributed a wonderful yarn about Carlo Baghetti, who also raced the 156, winning in his very first GP. 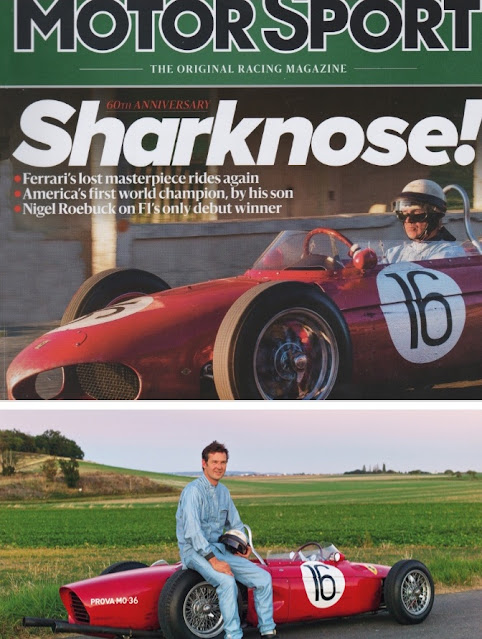 But it was the personal insights from Derek Hill which delivered so much pleasure in reading about, probably, the most unusual and beautiful F1 car of that era. It took the motor racing world by complete surprise when it first appeared, at Monaco in May 1961.

However, Phil Hill was no stranger to motor sport victories driving for Ferrari, having won Le Mans in 1958 with Oliver Gendebien in a Ferrari 250 TR/58. Plus he stormed to victory in 1960 at Monza, driving a Ferrari Tipo 246.

Now, to my own connection to these great drivers. It was to be 20 years on from Moss’s Monaco win, that we began our 39 year friendship; and 39 years after Hill’s F1 championship that we also became friends.

Stirling and I worked well together, very often, over the ensuing years, promoting Jaguar cars, in which he won his first ever sports car race in pouring rain at Dundrod in Ireland, driving the brand new Jaguar XK-120.

In 2000, I invited Phil Hill to join me and a band of top-level automotive writers for a Bentley Grand Tour through the Smoky Mountains in Tennessee, to sample the Continental T. These photos show a relaxed Phil Hill over lunch, and later driving the Bentley Continental T at speed, with me photographing his profile.

So these two photos below, taken at Pebble Beach are among my favourites, and as I look back on my very fortunate life, I recognise the great honour it is to have been able to call these two champions good friends.

Posted by John Crawford at 9:34 PM