Since Russia cut off supplies of gas to the EU the price of electricity in Europe is rising at an alarming rate and this has placed a huge obstacle in the path that EVs are following to become the dominant model of personal mobility.

EV proponents in Germany are saying that the EU governments must act quickly to ensure the cost of running an EV (that is, charging) must not rise faster than petrol, otherwise EVs will become less-attractive. Compounding the issue is the gradual reduction, and in fact elimination, of some subsidies to buy an EV.

The push to electrify driving got off to a slow start (thanks to the high prices of EVs), but no-one saw this coming.

As EVs rolled out of factories across the world Russia had not yet attacked Ukraine.

Gas supplies via the Nordstream pipeline were secure, but a combination of Russia eliminating the gas supply and the coming colder winter has meant that not only have electricity prices sky-rocketed, but charging stations are putting up their prices too.

Discount supermarkets, DIY chains and furniture stores which had until recently offered customers free charging while they shopped are now introducing charges.

One suggestion that could be relatively swiftly implemented would be to increase the vehicle tax on diesel and petrol cars.

This may be an attractive alternative to pro-EV governments, but it is actually blind to the real advantages of continuing with ICE cars. Here's a graph produced one year ago, which due to recent developments is totally invalid. 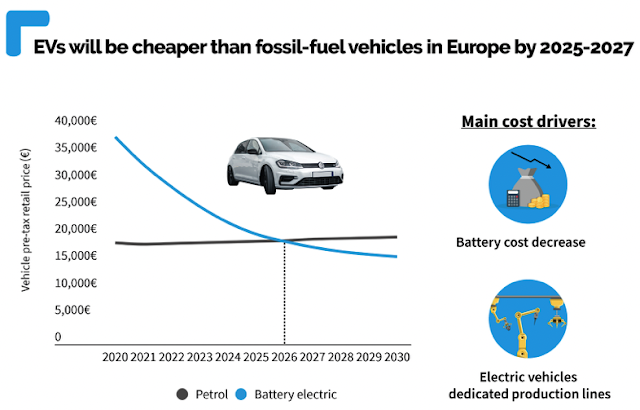 “Electric cars are losing their charm,” Helena Wisbert, director of the Duisburg-based Center for Automotive Research, wrote in a recent commentary for the economic daily Handelsblatt.

If, hypothetically, charging infrastructure is a headwind for EV sales, what are the major headwinds for installing new, fast charging units?

Two obvious reasons exist. For one, this is a classic “chicken and egg” situation: property managers don’t want to install chargers if there are no electric vehicles to use them, and drivers don’t want to buy electric vehicles if there are no chargers to fuel them. Secondly, fast charging technology is still in early days, thus it remains expensive.

Okay, these are clearly unintended consequences, and unforeseen developments, but it clearly underscores that this emotional push for EVs to dominate the automotive landscape defies a basic truth and that is that the world needs to pause and understand that ICE cars still have a future, and the impressive potential for carmakers to further reduce tailpipe emissions mean that the more affordable ICE cars can (and in my opinion) should continue to be an option.

Also, there is a rapidly-growing realisation that Toyota may be the only carmaker whose hybrid technology is exactly the right compromise between ICE and EVs.

As recent research in the USA concluded: “Focusing on battery-powered electric vehicles may neglect more fruitful means of emissions reduction. “The future is eclectic, not electric.”

Posted by John Crawford at 8:55 AM