About a squillion years ago (it could even be longer, such is the nature of enduring friendships), I was introduced to a young automotive writer named Angus MacKenzie. He was bright, inquisitive, and had that rare talent of persisting to ask difficult questions without losing his cool, or, annoying the interviewee.

I remember thinking, if he drives as well as he thinks, then Angus has a great future ahead of him, and that portent turned out to be true in every sense. We got along famously, and here we are in 2021, still the best of friends.

We started our friendship as fellow automotive writers, but then I entered the world of automotive public relations, and I had the pleasure of hosting Angus in some of the world’s most exotic locations, at new model launches with some pretty flash cars.

Here’s Angus’s view on why he took to automotive journalism like a duck to water….

I got my driver’s license exactly three months after my 16th birthday in a Series II Land Rover, ex-Australian Army with no synchro on first or second and about a million miles on the clock. “Pass your test in that,” said Dad, “and you’ll be able to drive anything.” He was right. Nearly four decades later I’ve driven everything from a Bugatti Veyron to a Volvo 18-wheeler, on roads and tracks all over the world.

Very few people get the opportunity to parlay their passion into a career. I’m one of those fortunate few. I started editing my local car club magazine, partly because no-one else would do it, and partly because I’d sold my rally car to get the deposit for my first house, and wanted to stay involved in the sport.

Then one day someone handed me a free local sports paper and said they might want car stuff in it. I rang the editor and to my surprise she said yes. There was no pay, but I did get press passes, which meant I got into the races for free. And meet real automotive journalists in the pressroom. And watch and learn.

It’s been a helluva ride ever since. I’ve written about everything from Formula 1 to Sprint Car racing; from new cars and trucks to wild street machines and multi-million dollar classics; from global industry trends to secondhand car dealers. 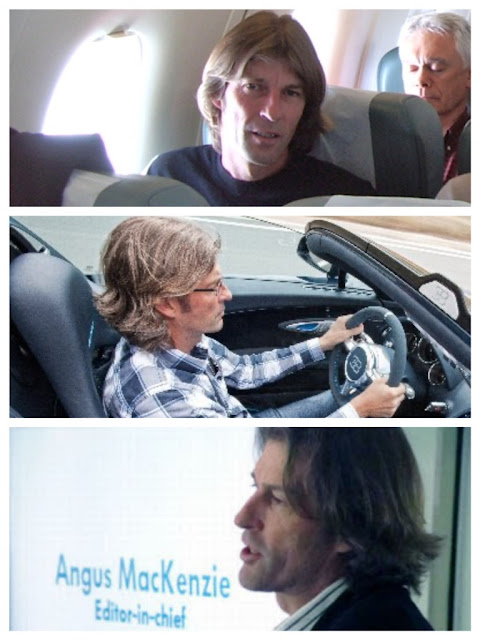 I’ve done automotive TV shows and radio shows, and helped create automotive websites, iMags and mobile apps. I’ve been the editor-in-chief of leading automotive media brands in Australia, Great Britain, and the United States. And I’ve enjoyed every minute of it.

The longer I’m in this business the more astonished I am these fiendishly complicated devices we call automobiles get made at all, and how accomplished they have become at doing what they’re designed to do. I believe all new cars should be great, and I’m disappointed when they’re not. Over the years I’ve come to realize cars are the result of a complex interaction of people, politics and process, which is why they’re all different. And why they continue to fascinate me.

One of the cars which fascinated Angus was an Aston Martin concept designed by Miles Nurnberger and Sam Holgate.

It was revealed in May 2013 at the ADAC Zurich 24 Hours of Nürburgring race, to celebrate Aston Martin’s centenary.

The CC Concept had a production run of TWO. Both cars were sold to private buyers, carrying one million pound pricetags – so he never got to drive it.

However, it’s amazing how life, times and circumstances change, and in the following post I’m honoured to welcome Angus MacKenzie to DRIVING & LIFE, and one of those serendipitous moments he talked about.

Posted by John Crawford at 3:44 PM