Here’s a triple package of luxury cars bursting onto the scene with more tech than is good for you; promises of great driving experiences; and all the baggage of brand image and traditional heritage. 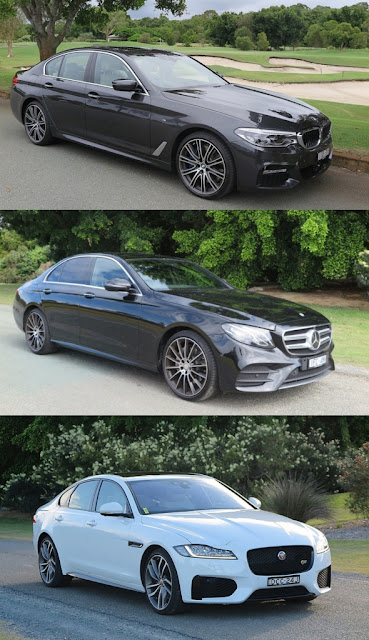 I speak of the new BMW 540i; the new Mercedes-Benz E-Class and the Jaguar XF. Driving them back to back reveals not only big differences, but also exposes my bias (just thought I’d admit that up front), and for me some definite ideas about what these three cars deliver.

The new BMW 5 Series is being hailed as BMW’s finest package for some time, and in the m-Sport version I drove it’s not short of performance, nor handling finesse (on the Sport settings). It’s beautifully finished, and having ditched controversial design themes, it is now more conservative than I expect from BMW.

The latest Mercedes-Benz E-Class follows a similar pattern, and has matured into a stately carriage, with an interior that looks much more cohesively planned than its C-Class sibling, with its iPad-like screen ‘growing’ out of the top of the dash. It’s a tech-laden driving experience, but at no time does it induce a desire to ‘go sporty’.

Now, Britain’s finest luxe competitor, the Jaguar XF, here powered by its supercharged V6 engine. It features its fair share of driving technology to keep pace with its competitors, and the ride and handling is as exemplary as you would expect from Jaguar.

However, that’s the area I find the most disparate comparison between these three cars. And, you can put that down to one component – aluminium.

I remember very clearly, that before attending the launch of the Jaguar XJ, I first drove the competing Mercedes-Benz S-Class and the BMW 7-Series.

The agility of the XJ, with its completely aluminium platform and body parts produced a large sedan experience marked by athletiscm, fine control and impressive driver feedback from the road. 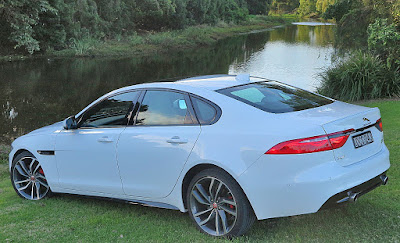 This time round with this Trio Luxe, it’s more of the same. If you truly enjoy a spirited drive every now and then, you would (should) choose the Jaguar XF. The other two cars in this triple review come across like grand old men. Not stodgy, but a tad pudgy in their response and weighting.

Jaguar has developed its engineering ethic to a new plane and despite being the smallest of the three carmakers, it has honed its new breed of aluminium-based passenger cars to a new level of sophistication and refinement.

Posted by John Crawford at 3:37 PM