THE LAST MOTOR by John Crawford

MODERN MOTOR magazine absorbed five years of my working life between 1972 and 1977, and now we see the final edition in print, after 68 years of covering the Australian automotive landscape.

For my part, my five was a fabulous trip. As Editor I delivered three of the biggest scoop stories, which in the early days of the magazine was what set it apart from its competitors. I and my team (which included my dear friend and brilliant colleague, the late Matt Whelan) broke the Holden Torana hatchback, the Holden Gemini sedan, and the pick of the bunch, the Holden Commodore – two years before it was launched!

Modern Motor debuted in 1954, and during the reign of the editorial team led by Colin Ryrie and Jules Feldman there were numerous scoop stories and lots of driving challenges. The magazine was always on top of the big news stories, or making its own headlines.

WHEELS suffered from longer deadlines, which meant that as far as breaking news went, it wasn’t quite as nimble as Modern Motor. However, it more than made up for that with outstanding writing from a stream of hugely skilled journalists, and also striking layouts and great cover artwork.

I should also mention that throughout their competitive history WHEELS nearly always clearly outsold Modern Motor. Must have had something to do with the writing.

With the final edition of the magazine, now simply called MOTOR, it’s very sad to see that the current editorial team completely failed to pay any respect to the dozens of people who went before. This photo of the cover of the last magazine, and the contents pays no respect to the people, the stories, and in fact the history of a publication which covered the Australian motoring scene in great depth, and when there was a big scoop, disappeared from newsstands in just a few days. 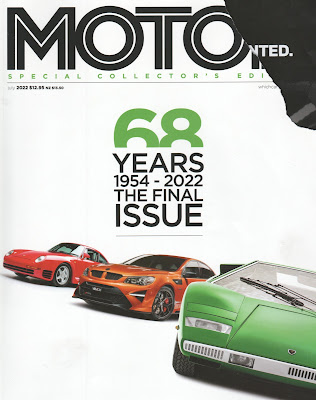 The failure to match the outstanding writing and artwork in WHEELS led me to take the decision early on in my time as Editor, that Modern Motor would become THE automotive news magazine. I completely reworked the editorial formula to ensure that HOT NEWS was its trademark.

Don’t get me wrong, I’m not upset by the fact that my five among 68 never rated a mention. However, I must say that the opening editorial by the last editor is among the most tasteless, puerile and uninviting examples of journalism I have seen as the ‘gateway’ to the magazine. It's symptomatic of the lack of recognition of its past in the pages that follow.

The editorial page was where the current editor either commented on important new cars, historic events in the industry, or raised questions of our political class about laws and regulations which affected the nation’s motorists. It was a serious look at a topical subject.

Farewell MOTOR, it was a great ride!