One size up
Think of the new VW ID4 as an electrified Tiguan. It´s a competent motor car, but it costs almost ten grand more than the genetically identical ID3.

If the ID3 (top) looks a bit frumpy and homespun to you, check out the more modern and grown up ID4 (lower) which is much sleeker, a little wider and physically better balanced even though it sits on the same wheelbase. 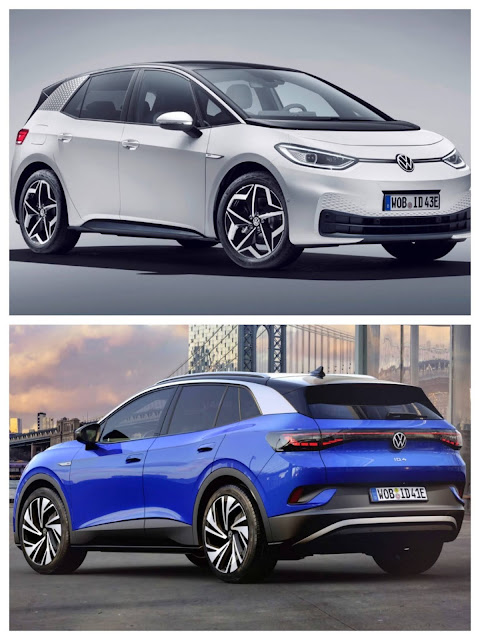 The new crossover, which will debut in coupé form next year, is also roomier inside, has a bigger boot, and its slippery drag coefficient of 0.28 is only up by a token 0.01 points.

But the plug-in midliner is a pricey piece of kit. If the German tariffs are anything to go by, the 1st edition will cost around AUD86,200 - while the even better-equipped Max version may make you approximately AUD86,200 even poorer - before subsidies.

Compared to these numbers, the long-range Tesla Model 3 is a bargain. To add insult to injury, Elon Musk´s effort also beats the ID4 Pro S in terms of range (by 563km against 523km) as well as performance (by 228kW v 152kW), not to mention the fact that AWD and a dual motor layout are not yet available for the car from Germany.


Unlike Tesla, VW still indulges in excessive complexity. The ID4 will eventually be offered in ten different trim levels, with various equipment packs and a choice of five power stages rated at 112; 134; 152; 198 & 228kW. The smallest battery produces 55kWh, the mainstream version is good for 62kWh, the top-end energy pack delivers 82kWh. The corresponding maximum range is 343, 393 and 523km. 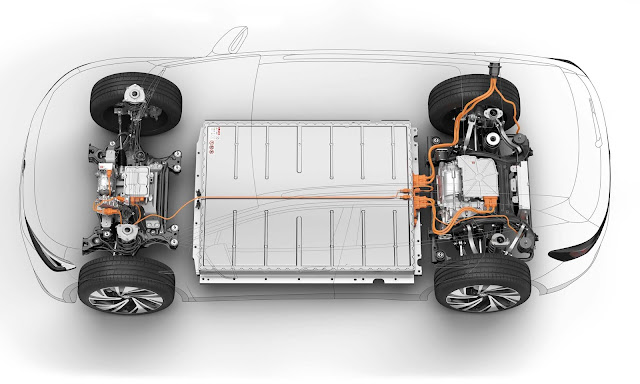 Consumption? Around 15kWh per 100km, but this number may well triple when you max out the car at the governed top speed of 160km/h on the autobahn.

At a constant 120km/h, the biggest battery is good for about 322km between pit stops. Find a 125kW charger, and it should take only 30 minutes to bunker enough power for the next 322km stint.

Still not convinced? By mid-2022, VW intends to launch an even beefier 95kWh kraftwerk which is claimed to keep the ID going nonstop for almost 440 miles.

First driving impressions were restricted to the Ehra proving ground, which is crammed with 120km of "From Heaven to Hell and Back" test tracks. Like the ID3, its bigger brother rarely puts a wheel wrong, be it on the bumpy cross-forest gravel piste, the banked high-speed oval, the topsy-turvy handling course or the watered skid pad. 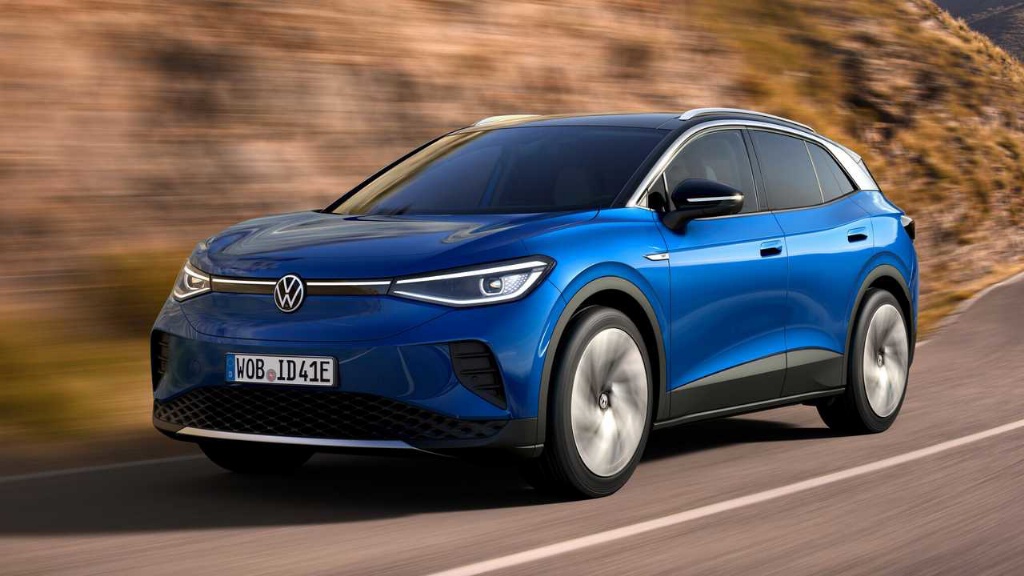 Like the Beetle, the electric Volkswagen is rear-engined and rear-wheel drive, but unlike its ancestor the new whisperliner never ever indulges in lift-off or power oversteer. Which is a shame, really, because all that instant torque beckons to be unleashed through the twisties where mild understeer is the name of the G-rated game.

Thanks to the low centre of gravity and the balanced weight distribution, the ID4 hugs the ground like a velcro-strapped centipede. Even when fitted with the optional XXXL 21in tyres, the ride remains compliant on most surfaces, and it doesn´t fall apart when you switch the DCC setting from Comfort to Sport. The 152kW version takes off like greased lightning, but in combination with the single-speed transmission, the maximum grunt of 310Nm dished up by the Pro Performance model starts fizzling early around 80km/h. 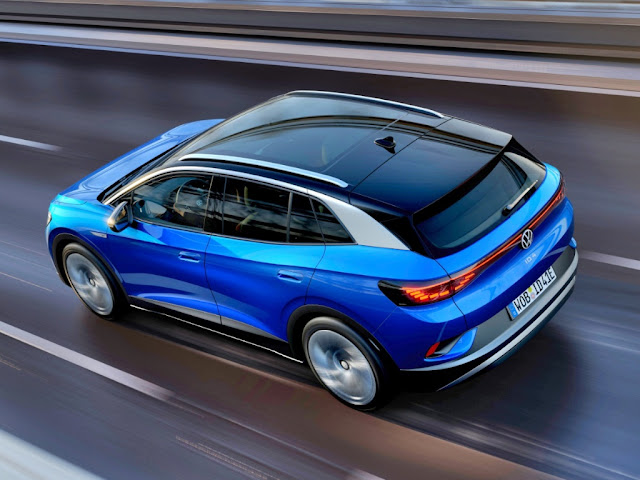 Our pre-production mule did however collect credits for the quick throttle response, linear acceleration, strong stopping power and the hush-quiet working noises. Above 100km/h, all you hear is the wind, the tyres and the synthesized ´Hey, ID' voice control.

Whereas the base ID3 is a rather barren transportation appliance, the fully loaded ID4 ticks all the boxes without the faintest trace of wood or leather. 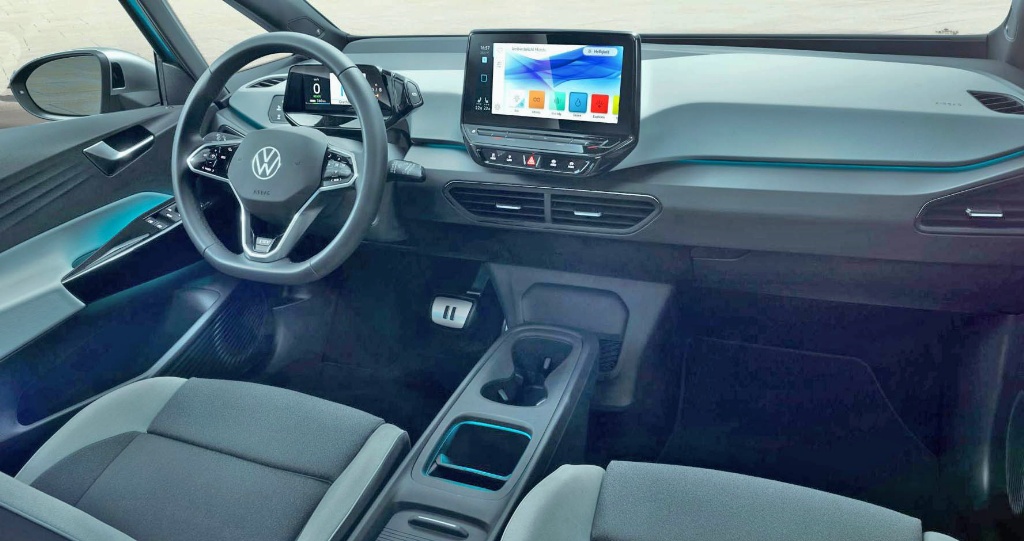 The ergo seats are among the best of their kind, the full-length glassroof makes the cabin feel bright and airy (we´ll talk about the energetic drawbacks some other time), the surface materials are definitely classier and the more relaxed ergonomics featuring direct access buttons for temperature, assistance and driving programmes are a step up from the Golf VIII.

Hit the starter button, and the system whizzes into stand-by mode. A toggle switch mounted to the steering column lets you select the direction of travel and the recuperation intensity. Low encourages early coasting, High supports the one pedal driving style coveted by some. Sadly, both set-ups are neither scalable nor quite radical enough for either fan base. The equally uncompromising ESP calibration may include a sports mode when the AWD variants come on stream.

The ID4 likes to fight charge anxiety and range anxiety with a 'pictogramme' nicknamed the fried egg zone. A blue blob is part of the satnav programme. 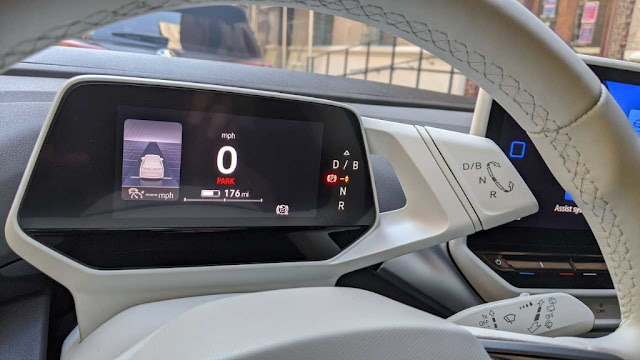 It converts the fluctuating state of charge into a real-time 3D maximum range display dotted with close-by charge points. Depending on speed and driving style, the outline of this rejoice-or-despair diagram shrinks or expands.

Once the range drops below 35km, the drivetrain automatically slips into 'turtle mode' which cuts off air con and heating while reducing the available performance. Ignore it, and the spy in the cab will soon advise you to start looking for a safe parking spot.

When the car does finally run out of juice 13-15km later, voice control airs the polite question whether it should 'contact the free recovery service'?

Big Brother is also in charge of the pending Digital Key feature which ensures - at a cost - that the car is picked up, charged and cleaned overnight, before being returned the next morning. The future is now, no doubt about that.

Plus
Has the potential to reinvent the Volks-Wagen
Minus
May be a tad too expensive, even for well off people

First verdict
Just what the doctor ordered to save planet earth. Season Two - Stand by for ID5, 6.

The First Hour
1 minute
Nice. Marks the transition from Wolfsburg baroque to global stylishness.
11 minutes
All software glitches taken care of? Well, err, maybe tomorrow´s software update will fix it.
21 minutes
Electric braking fuses with hydraulic braking like identical twins. Well done.
32 minutes
The ID4 fills the void between Zoe, et al and the Model 3. Could do with more poke, though.
43 minutes
Amazingly efficient personalized A to B algorithm. All the driver needs to do is steer.
54 minutes
Software bonding is the latest tech fad. This car may know you better than the wife.

NOTE: All AUD prices are for comparison only as local pricing has yet to be decided

Posted by John Crawford at 2:43 PM