ELECTRIC VEHICLES? THE FUEL BATTLE IS ONGOING by A.J. Caldwell

If you ask anyone what the future of cars looks like, they will probably tell you it’s electric, and that Tesla is at the forefront of the movement.

But what if there’s another option that could be just as good or even better than battery-electric vehicles?

What if you could power cars with the most abundant resource in the universe with water as the only by-product? And they’re more likely to disrupt the auto industry than battery-powered cars, like Teslas. 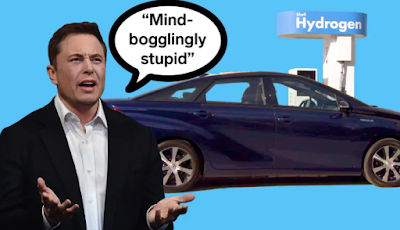 Hydrogen fuel cells have been a technology of great promise as well as great scepticism.
Elon Musk himself often mocks hydrogen fuel cell technology, going so far as to call them “fool cells” and “mind-bogglingly stupid.”

The biggest risks to widespread use of BEVs are firstly, cost; then the limited range which leads to ‘range anxiety’; and lastly weight – because batteries are very heavy and impede 100% operational efficiency.

A hydrogen fuel cell electric vehicle, or FCEV, combines hydrogen with oxygen to produce electricity, which then powers the electric motor that drives the car.
The only emission from an FCEV's tailpipe is - water!

Now, when it comes to other reasons why people don’t buy battery-electric vehicles like Teslas, there are three main reasons: They take too long to recharge, they have a limited range before they need to be recharged, and they cost a lot more than your comparable gas-powered car. So, how do hydrogen cars stack up in these areas?

When it comes to recharging, hydrogen cars have battery-electrics (BEVs) beat.

At a supercharging station, a Tesla can charge anywhere from 30% to 50% in 15 minutes, but you’ll be at the charging station for over an hour for a full charge.

Fuel-cell vehicles don’t require charging at all. The hydrogen tank is refilled at a hydrogen station in less than five minutes, just like your typical gas station today. That’s because FCEVs don’t store electricity like a battery; they create it on demand to power the motor.

When it comes to range, hydrogen-powered cars seem to come out on top again.

Between the three fuel-cell vehicle brands on the road today in the USA (Hyundai, Toyota, Honda), they have a range of 312, 360, and 380 miles. Most electric vehicles have a range under 250 miles. While some Tesla models offer a range of more than 300 miles, they often cost a great deal more than the average car buyer can afford.

Range and refuelling times are so important that 78% of automotive executives believe fuel-cell vehicles will be the breakthrough for electric mobility.

But that’s not to say fuel-cell vehicles don’t have challenges of their own. FCEVs need more competitive pricing. The suggested retail price for the fuel-cell vehicles available today is around $US60,000, which is about $US20,000 more than an entry-level BEV.

That’s because production output of these vehicles is incredibly small. Obviously, as production numbers increase (with the growing availability of hydrogen as a fuel), prices will fall – dramatically.

Finally, there's the Plug-In Hybrid EV (a PHEV). This technology was pioneered by Toyota, and the company says hybrid technology will continue to underpin its future position for some years to come.

As PAUL GOVER has driven all three, including a PHEV, I’ve asked him to contribute his experiences to DRIVING & LIFE.

(NOTE: The above text comes from writer A.J. Caldwell at the USA’s BUSINESS INSIDER)