I think Mazda’s design team may have been on the funny mushrooms, weeds, or brownies with a bite, the day they signed off the MX-30. It’s a hard car to appraise. It’s quirky, unusual, mixes ‘green’ technology with normal car stuff like vinyl, leather and carpet – with the usual ‘plastic’ dash and interior mouldings. 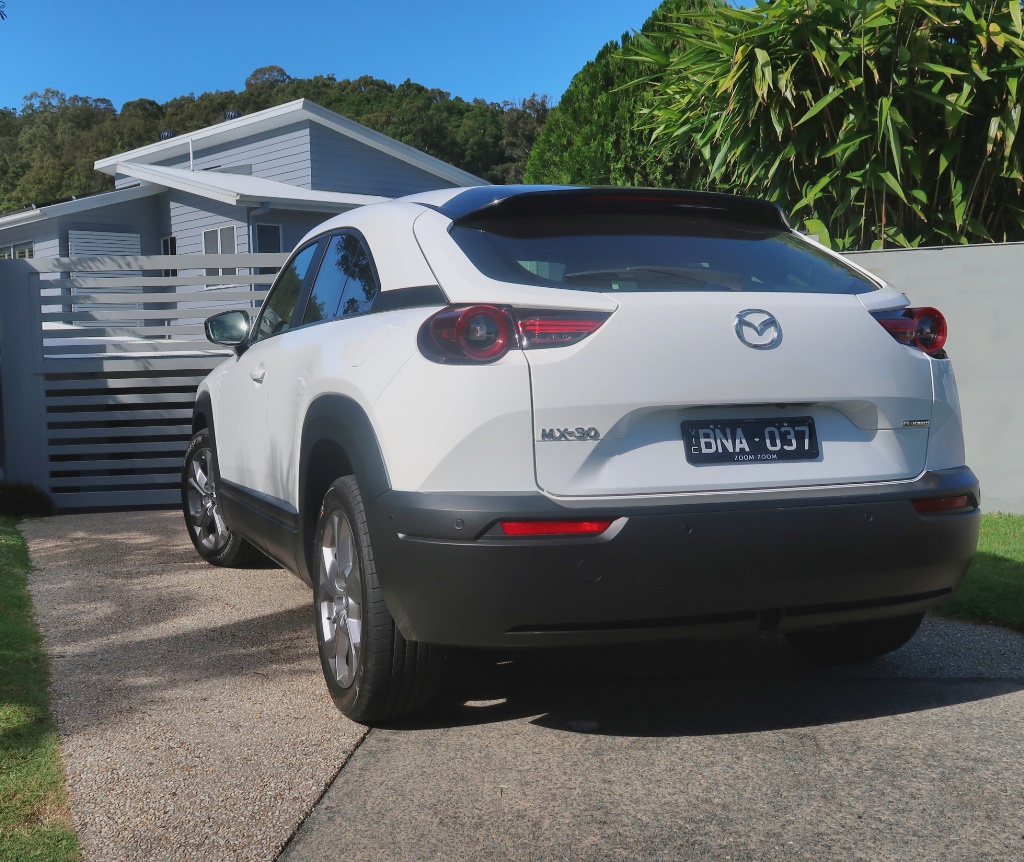 The MX30 comes hot on the heels of the stylish CX-30. The MX-30 separates itself by offering those beautifully misnamed ‘suicide doors’ – in other words, access to the rear seat is via rear-hinged doors. 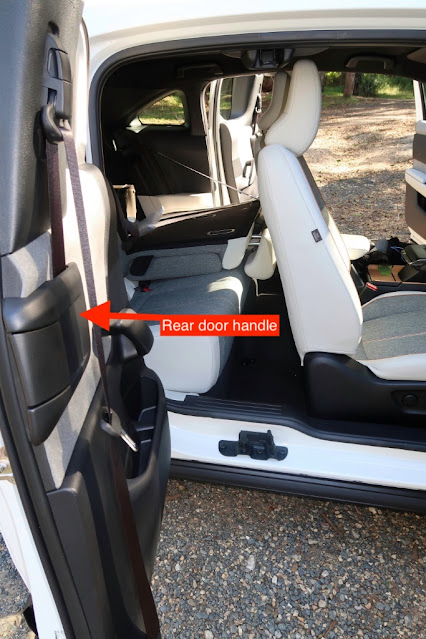 They appear to be tiny at first glance, but combined with very wide front door apertures, this unusual ingress/egress system, is the same as a two-door coupe, and a nod to the Mazda RX-8 rotary-engined sports coupe – which is not surprising as the RX-8 designer, Ikuo Maeda, is now Mazda’s Head of Design.

The MX-30 shares its platform with the new Mazda 3, CX-30, and an upcoming EV which will feature a 35 kWH battery, recharged in part by a small version of the Wankel rotary engine, plus the usual regenerative systems.

Early drives of the pure EV are not encouraging. Testers in the USA struggled to achieve the paltry 124 miles of range, and in direct contrast to Tesla’s ‘Ludicrous’ setting, the MX-30 EV takes 10 seconds to accelerate to 100 km/h! Maybe more ‘fairy dust’ will be needed before the EV hits showrooms.

But, back to this unusual MX-30. The data sheet says it’s a five-seater, but the one in the middle in the second row had better be a dwarf-like creature with short legs. Also, because of the rakish fastback styling, the trunk (load space) offers just 300 L.

So, on the back, the badge says eSKYACTIV G, which sent me looking for a press release to describe what the 'e' stands for, because looking at the instrument pack, there’s none that you would normally associate with a hybrid, or a pure BEV.

Turns out this first step by Mazda into the world of current rather than litres, is described as a ‘Mild’ hybrid. It offers the same 2L four-cylinder petrol as the Mazda 3 and CX30, but augmented with a boost from the battery. Mazda is a little coy about telling us how ‘much’ boost, so don’t ask me.

On the road it’s quite a sweet car to drive, with a supremely comfortable ride, responsive handling and great swathes of equipment and high-tech features. 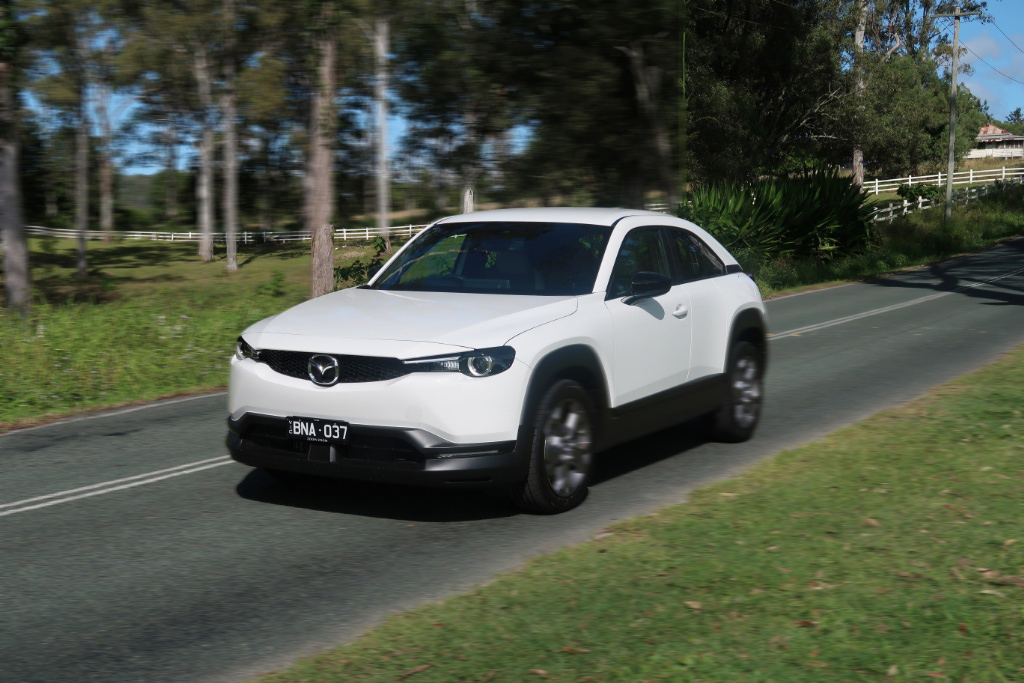 In its global markets Mazda has assumed a status as a ‘premium’ manufacturer and does not seem to unduly care much about the impact of pricing for its levels of finish. Indeed, the view from the driver’s seat is quality finish, impressive trim margins, a logical layout of controls, and one of the least invasive steering systems among the latest batch I’ve driven.

The ‘green’ touches on view are also quirky. The hinged-tops of the cupholders, and the lowest level of the 'floating' centre console are finished in recycled cork, and there’s some other weird-feeling material on the tops of the door interiors, not unlike what we use to refer to as ‘mouse-fur’ when it was originally applied to headliners. According to the press handouts, it’s made from some sort of recycled something-or-other. 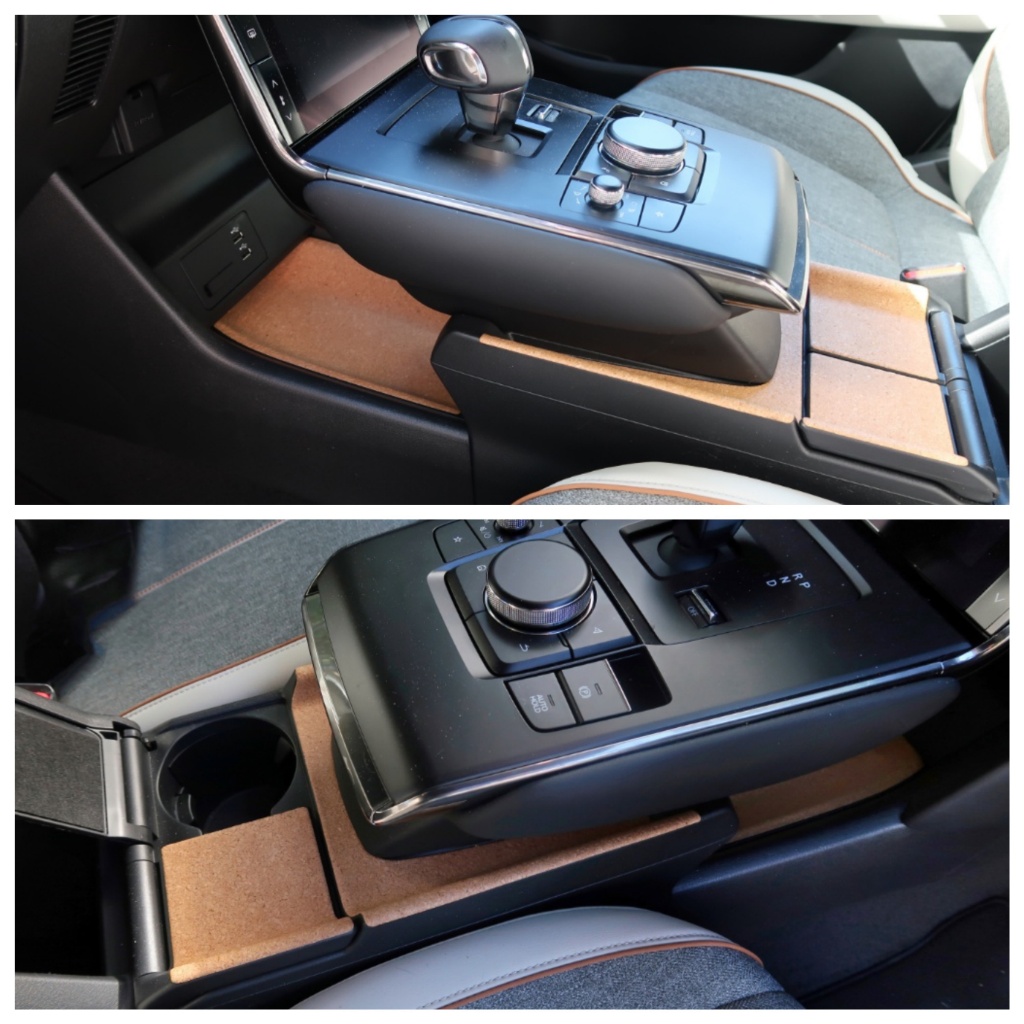 The total package, and the overall recipe is very bewildering, and I am seriously unsure who it’s aimed at. Some reviewers refer to it as an SUV, but with front drive only, scrambling for grip on loose surfaces, believe me the MX-30 is just a stylish crossover, and I certainly wouldn’t be planning a crossing of the Simpson Desert in an MX-30.

Pricing starts at AUD$33,990, with the most expensive variant at AUD$36,490 – but be warned there are a couple of ‘special packs’ which may tempt you – although you may drive out paying close to 60 grand!

However, this is Mazda showing it’s capable of creating a different animal from the pack (which it has never been afraid to do). As usual the high quality of design, fittings, finishes and interior ambience is first rate, and certainly worthy of a ‘premium’ label.

Design-wise I like the clean lines; the 'cantilevered' extension of the hood over the grille and the gradual maturing of the Kodo design theme. 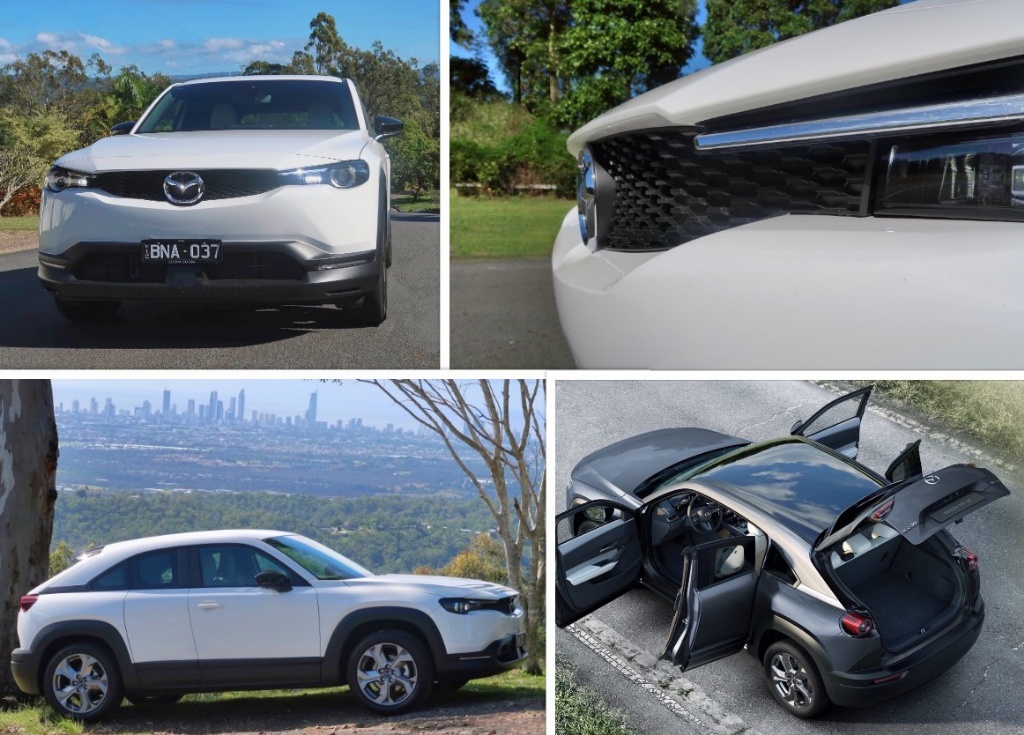 However, I’m afraid I was left with the unanswered question: “Why?” I suppose the Mazda guys and gals will reply, “Because we can.”