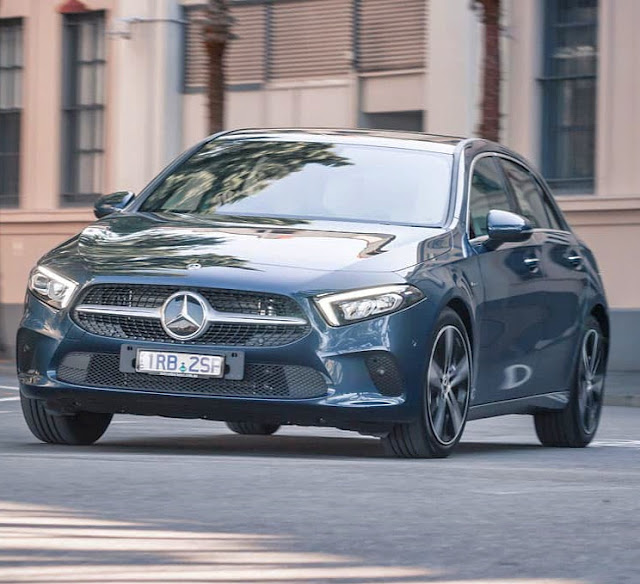 Plug-in hybrids are the new frontier for SUV families, but the Mercedes-Benz A 250 e puts a more affordable and city-centric spin on the switch to second-generation electrification with 73 kilometres of fully-electric range.

The newest member of the Mercedes-Benz A-Class clan is also the fourth plug-in hybrid for the German luxury brand.

The difference is that it is not an SUV, but a city-friendly compact car that is available as either a hatchback or sedan from AUD$63,400.
For most Australians their first exposure to 'Hybrids' was when Toyota unleashed its first Prius models. PHEVs have been a bit on the rare side, with Mitsubishi being one of the few to explore the advantages. However, PLUG-IN HYBRID EVs are likely to become much more common as a stepping stone to fully-electric; or, even FCEVs (Fuel Cell Electric Vehicles) which Mercedes-Benz can claim to have been an industry leader. 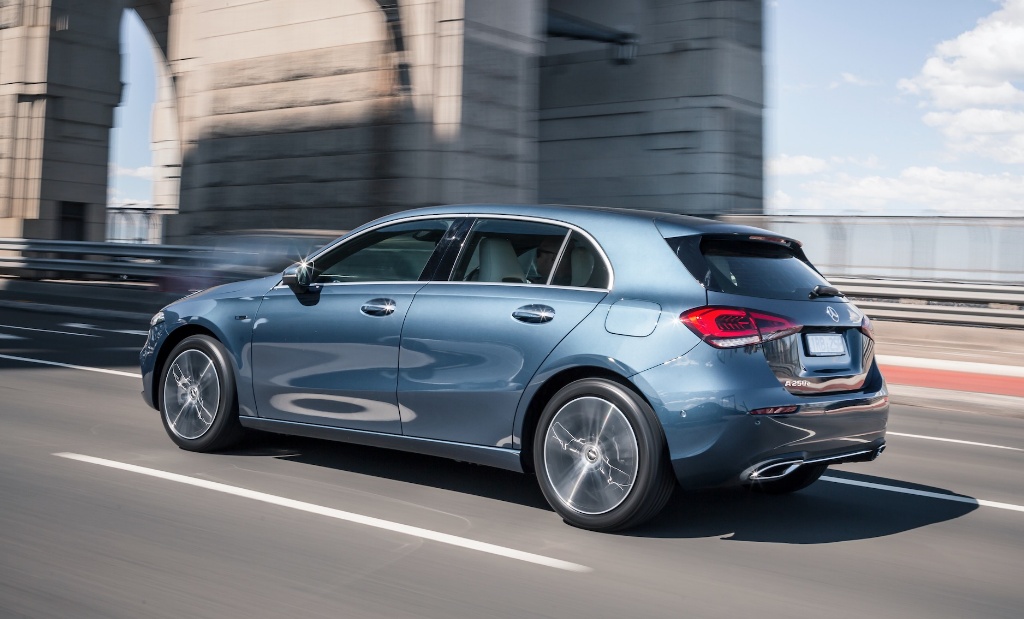 It is also the first Mercedes model available with high-speed DC charging ability with the promise of a boost from 10 to 80 per cent of battery capacity in as little as 25 minutes. 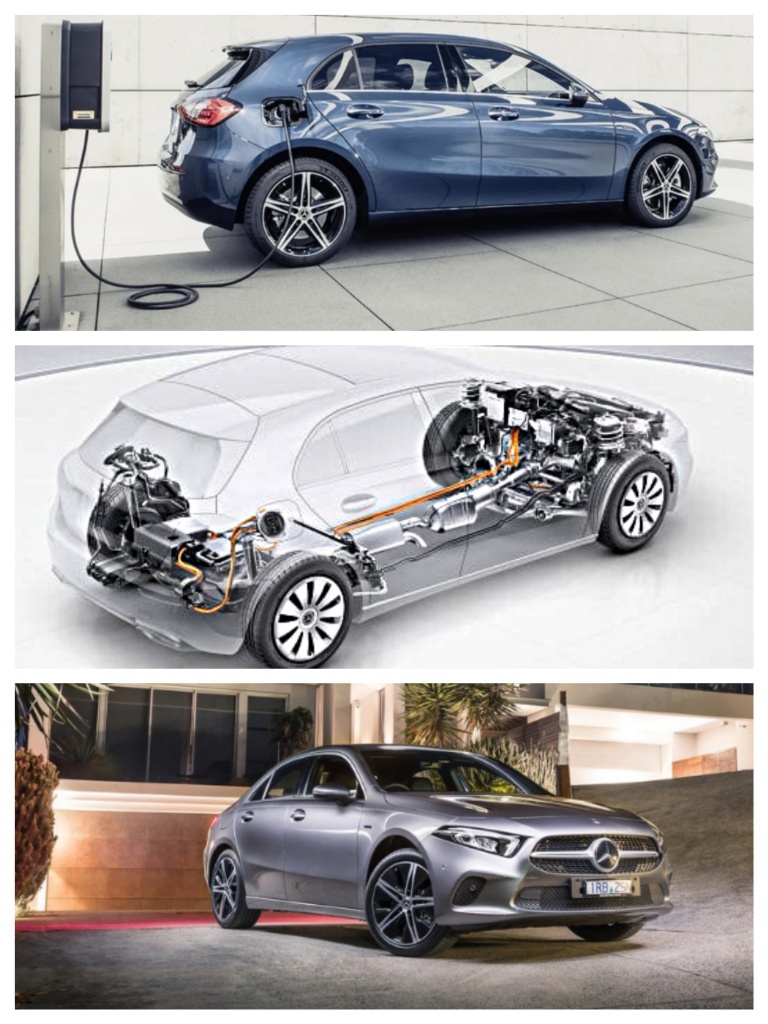 The showroom sticker for the A 250 e, from AUD$63,400 as a hatchback and AUD$66,000 as a sedan, is just the start of the potential savings for the greenest of the new A-Class family.

Running fully electric for weekday commuting is a genuine probability and means visits to the petrol pumps will be rare, and usually only needed for longer runs into the country.

The price difference between the 250 e and an equivalent petrol-powered model is AUD$11,900 as a hatch, and AUD$12,500 as a sedan, but the extra spend gets a lot of extra technology.

It’s still a front-wheel drive car but has the latest eight-speed DSG gearbox and standard equipment runs from 18-inch alloys and a fully-digital widescreen dashboard to wireless charging, and LED headlights.

Something new is ‘pre-entry climate control’, which means the cabin can be pre-cooled or heated using a smartphone app. 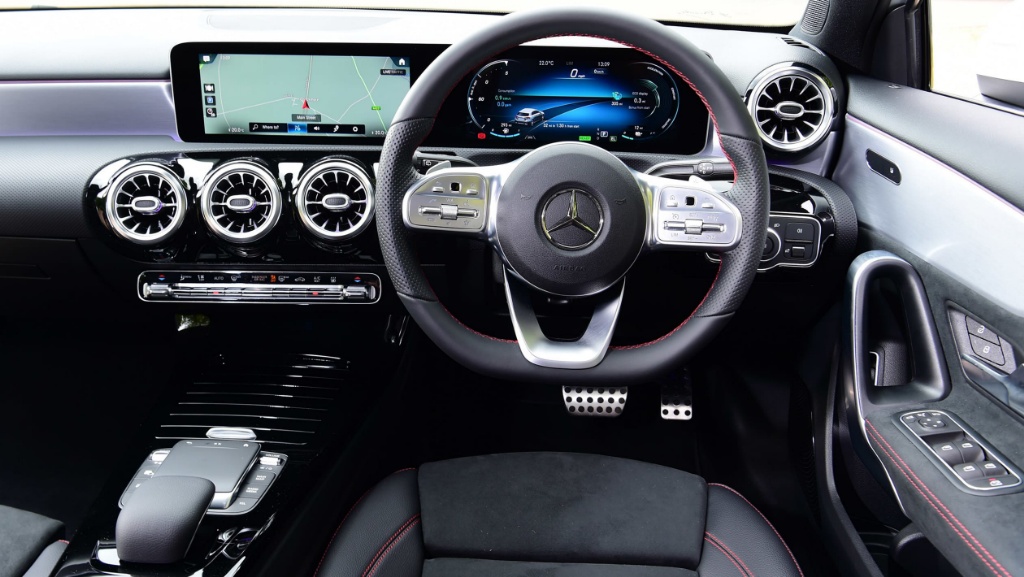 The 5-star safety suite is as expected from Mercedes, with everything from nine airbags and Pre-Safe crash anticipation to traffic-sign recognition and adaptive high beams.

The newcomer sits in the middle of the electrification roll-out by Benz, following the EQ Boost ‘mild hybrid’ system that uses a 48-volt battery with a starter-generator, and ahead of the fully-electric EQC range.

The heart of the system is an electric motor tucked inside the transmission, and a 15.6 kWh lithium-ion battery below the back seat. 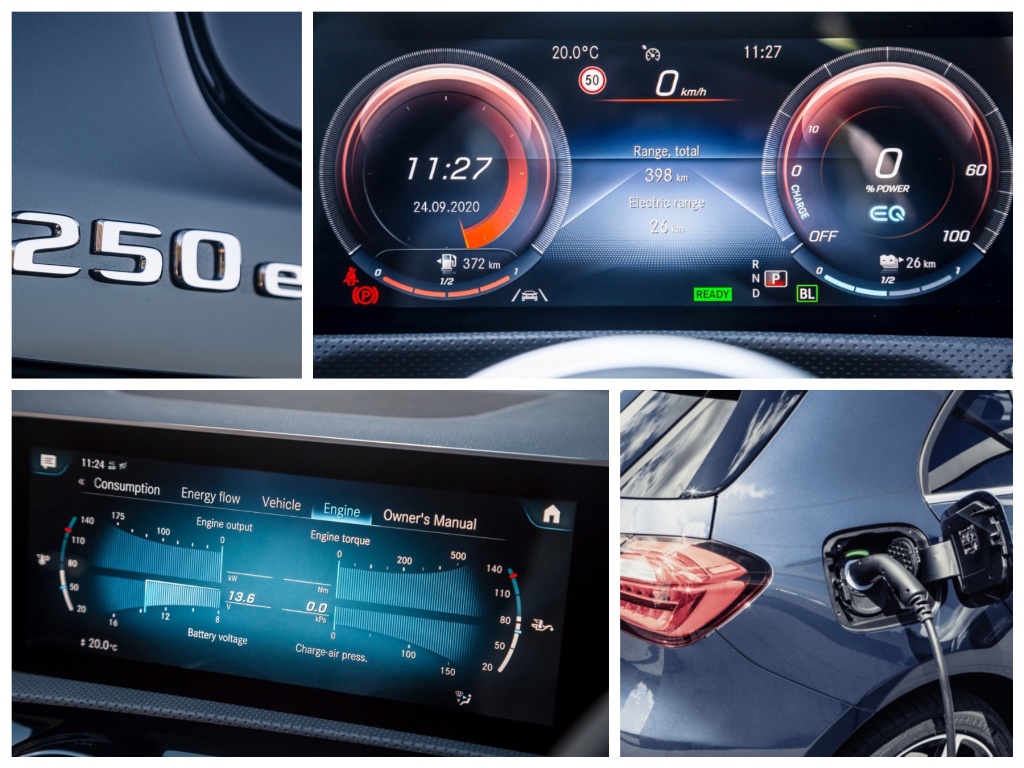 The operation of the system is complex like all hybrids, as the car can run in parallel, series, and pure-electric modes. The default setting is electric and the 1.3-litre combustion engine can provide charging, a performance boost or pure petrol power.

Outside the car, the basic charge time is eight hours. Taking advantage of Benz’s home wallbox (AUD$1250) the figure halves to four hours, and the DC Charging Package (AUD$1490) cuts it all the way to 25 minutes to achieve 80 per cent of battery capacity.

The headline number for the A 250 e is 73 kilometres. That’s the car’s electric-only range, as measured to the Australian Design Rule standard.

But the car has far more potential and will easily cover 350 kilometres, even with a tiny tank to fuel the combustion engine, if you have a chance for regenerative charging in rolling countryside.

The many modes of the system, from ‘electric’ through to ‘boost’, can be controlled entirely by the car or the driver can get involved at several levels.

Pushing the accelerator beyond the ‘kick-down’ point figures the combustion engine, the flappy paddles for the gearshift can be used for regenerative braking, and it’s possible to go one-pedal driving to use regen for slowing, or ride the brakes on a downhill run to give the battery a top-up. 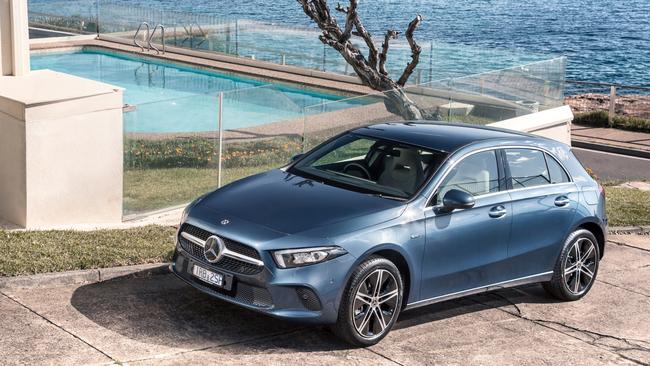 The A-Class is a hybrid to genuinely like. And enjoy.