CARS, CHARACTERS, CLASSICS & CAMARADERIE - WHAT'S NOT TO LIKE? - by Peter McKay

The glorious undulating, snaking roads around Adelaide are pretty enticing, especially when the authorities agree to block off some of them to allow assorted maniacs and enthusiasts to have a blast in their rather eclectic choice of machinery, new or elderly. 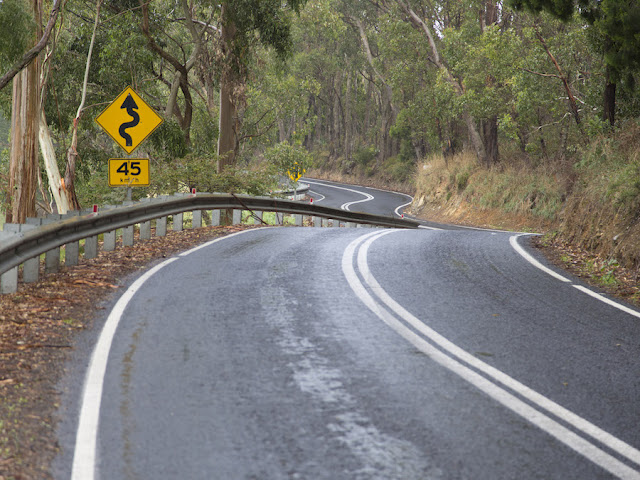 Or, better, a machine thoughtfully provided by someone else, like a car brand or a collector. 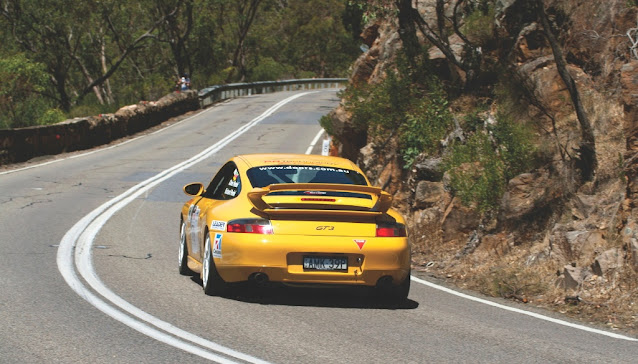 This was Classic Adelaide, an excellent idea dreamed up in the mid 1990s by collector and enthusiast, the late John Blanden, to give lovers of motorised transport the opportunity to drive their glorious sporty machinery in the manner intended. 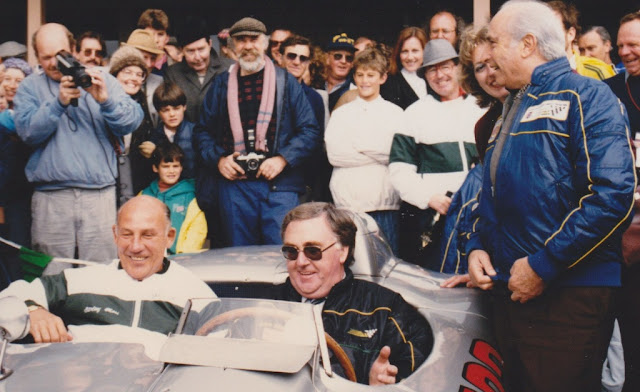 Back in 2003, the year highlighted in this recollection, the event unfolded as a lovely, crazy blend of all manner of vehicles and pilotes.

Conveniently most of the stages were within 50km of Adelaide’s languidly beating heart– jinking through the wine country - Barossa Valley, the Hills, McLaren Vale and around Victor Harbour. 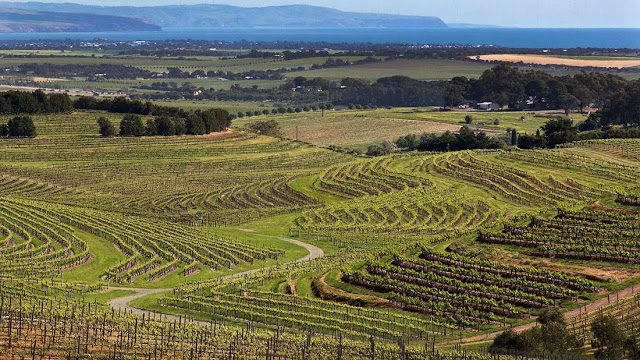 Spectacular Aussie scenery, brilliant and challenging roads for drivers both brazen and, if they choose, less adventurous. 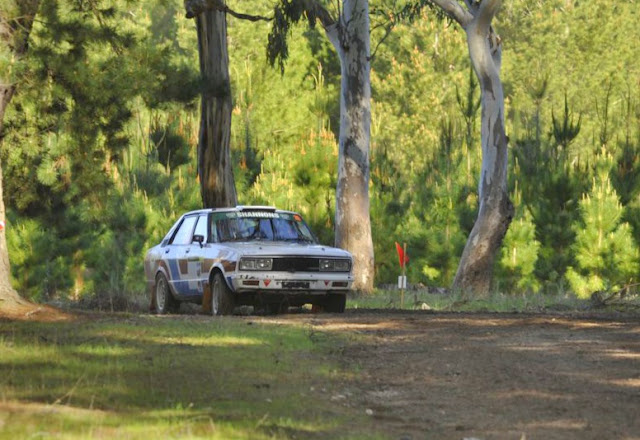 In 2003, there was a record 34 closed road special stages totalling 250km, rimmed by gaping, appreciative spectators taking in the sounds and sights of a fast-moving car museum.

There were reconstructed competition cars; restored historic cars, and a lot of newer machinery which really turned heads - given the total value of ALL the cars on show. 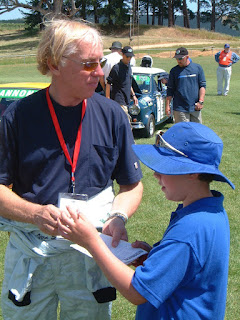 They were driven by a cast that ranged from world champ Jack Brabham, and his old mate and rival Stirling Moss, Le Mans winner Vern Schuppan (left), television star Glenn Ridge, author Doug Nye and a host of assorted characters and car cuddlers.

Classic Adelaide was a heady $35 million mix of the exotic, the well-preserved, the new and efficient, the rare, and in the case of a Volkswagen Beetle, the questionably bourgeois. The oldest car in this event was the 1920 Frontenac Indianapolis Special driven by Victorians Wes and Dianne Wilkinson.

“I love looking at old cars, but I don’t know about driving them,” Schuppan told me by way of explaining his choice of weaponry, a modern Mercedes AMG SLK 32.  Brabham’s silver plaything was a current SL 500 but fellow knight Moss, was entrusted with something from “his” era, a sonorous 1956 Mercedes-Benz 300SLS sports car flown out from the Benz Museum in Stuttgart, specially for the event. 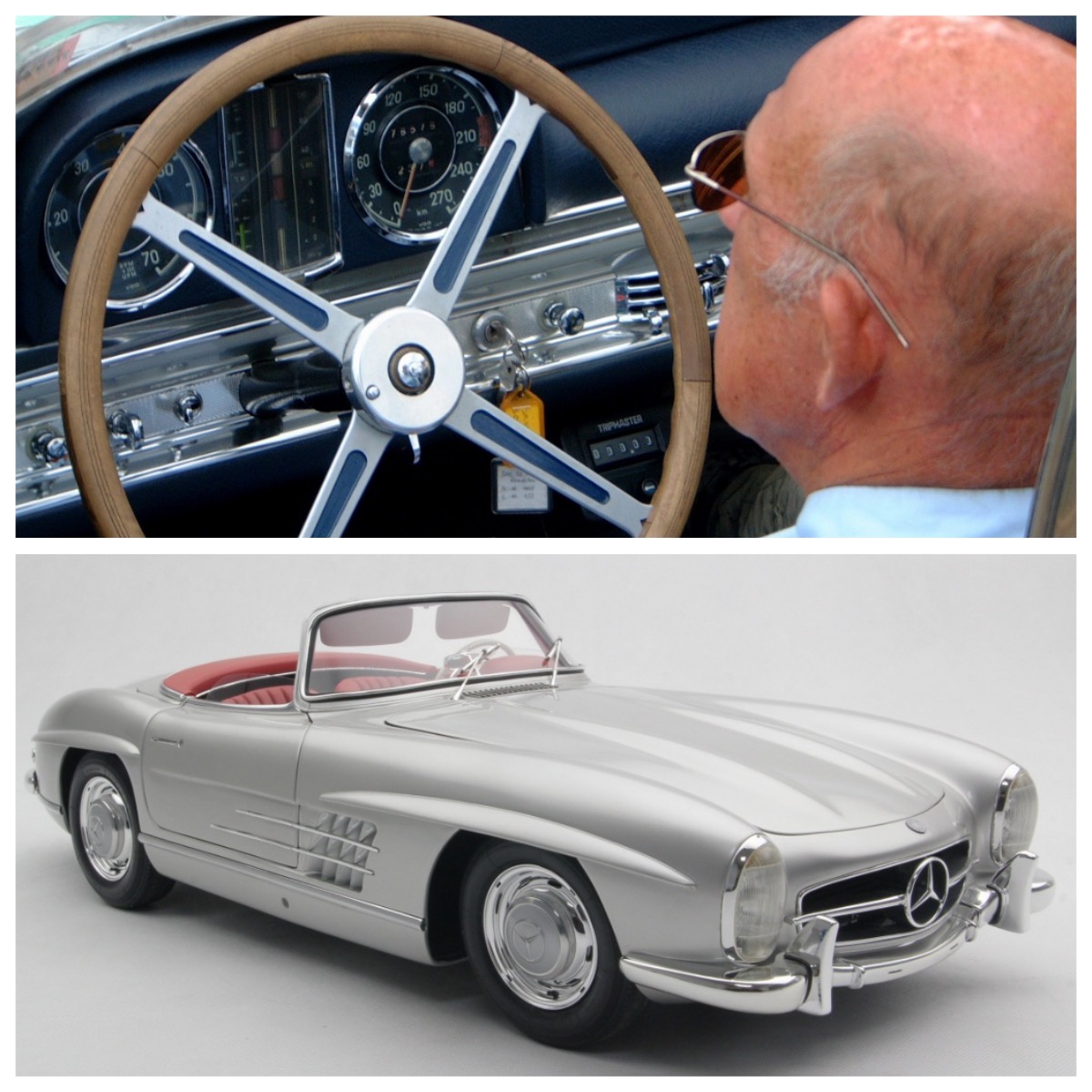 Despite recently turning 74, Moss was clearly not disposed to nanna naps when he could either be wringing the neck of the $1 million dollar (back then; circa $2 million today) museum piece, or enjoying Adelaide’s finest restaurants.

For when everyone was done with getting the adrenaline pumping and armpits moist, there was some serious socialising at night.

The Thoroughbred Touring category was where Moss, Brabham, and Schuppan lined-up, along with many others in vehicles of assorted vintages and value.  This category was favoured by many of the overseas enthusiasts, particularly those not prepared to fit cages to their precious toys.

The regulations permitted the absence of a roll cage but insisted on a helmet and CAMS competition licence. The stages were untimed, and competitors were pegged to a 130km/h limit.  This last imposition was no hardship on tight, narrow and ever twisting roads.  Even constrained to these speeds, there were some expensive crashes.

Here was my close shave with a legend, part of a story I wrote for Wheels magazine…

Wow, that was so-o close, folks!

At Yankalilla I nearly have a jolting head-on shunt with Stirling Moss. But at the last possible moment, he propped, and I jinked left.

It happened when he was coming out of the toilet, and I was heading in…

Yes, participants and spectators get more than the chance of a brush with fame during the Classic Adelaide Rally. Some lucky sod probably had his boots splashed by Sir Stirl.

In what other motor racing event do regular people get the chance to compete with the elite in their sport?

Part of the attraction of Classic Adelaide, apart from the extraordinary machinery, and the thrill of sharing challenging roads with the legends, and the bonhomie among the competitors, is the social stuff. 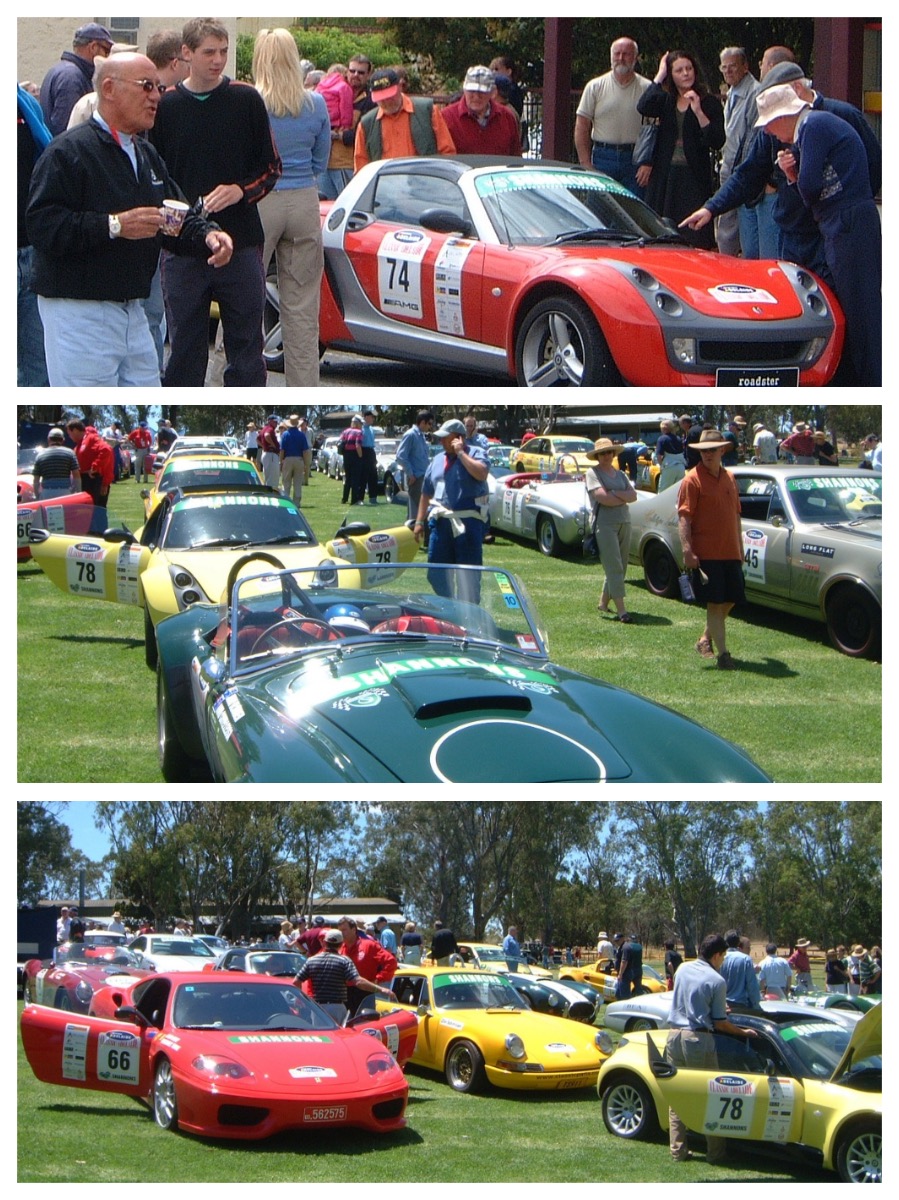 On Thursday, the luncheon stop is at Peter Lehman’s winery, cars parked on the rolling lawns.  So steamy hot is the weather that a couple of gals in an E-Type Roadster reportedly whip off their tops, and remove their bras.  Someone provide the photographic evidence, pullEEEEZE!

Out and about in just about any place on the planet, Stirling Moss was never unaware of the significantly-elevated place he earned in motor sporting antiquity. Sir Stirling, who died earlier this year after a hectic 90 years on earth, held a special place in the hearts of motor sports followers. 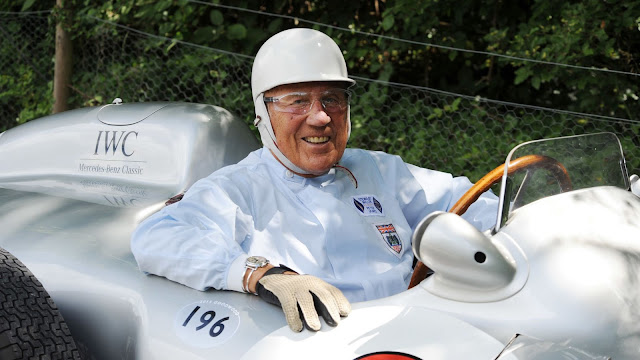 He told me he competed in about 10 historic motor sporting events a year – “four like this one and the Tour de France, and the rest are race festivals such as Goodwood”.

“I do all I can, but it’s not that easy, especially in old cars.”

Moss proved to be an enthusiastic advocate of the event and its host city. “The roads here are stunning and the whole set-up is unbeatable - and I’ve done a lot of great road races.

“Adelaide and its people are so welcoming and enthusiastic,” said the great man from beneath his characteristic 365-days-a-year tan. “I’ve never known a village of one million people and I say that in the nicest possible way.  They have sensational wines here too, and that is important to me.

“It’s an event of great character.  People have been telling me for ages, ‘Stirling, you must do it’, and now I’ve managed to fit it in, and I’m so glad.

“Pace notes would be helpful, though, I must say.”

And what would be an ideal car for Classic Adelaide?  “Oh, a Chevron B16 on treaded tyres, or maybe a Lotus 7.”

Until slowed by a bad fall down a lift shaft in his home in 2010, Moss continued to participate in historic races and rallies.

On 9 June 2011 during qualifying for the Le Mans Legends race, Moss announced he had finally retired from racing, saying that he had scared himself that afternoon. He was 81.

We should all count ourselves lucky that we had so much of the great man for so many years.

Posted by John Crawford at 8:48 AM