LOOKING BACK - WHAT A LIFE! by John Crawford

Of ALL the events I frequented annually during my 12 years working in the USA, none were more special than my two favourite annual American concours events – Amelia Island in Florida and Pebble Beach in California. 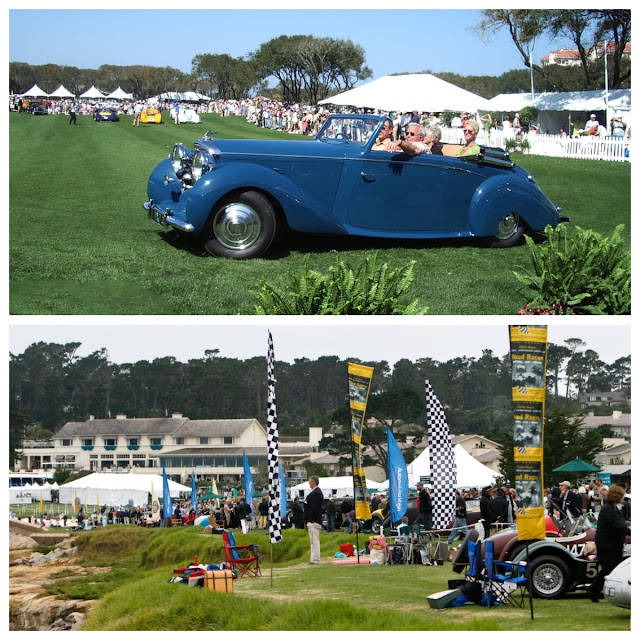 The last time I attended both was 2010 – and given current health considerations, it will most likely be the last time – so forgive me a retrospective look back at both. 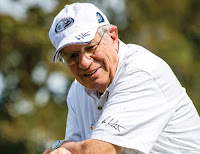 They were special for one reason alone – the people I was fortunate to meet and also with whom I was able to forge deep and lasting friendships. The Amelia Island Concours, north of Jacksonville on Florida’s east coast was the brainchild of lifelong car enthusiast, Bill Warner (right), who has built his event into the east coast equivalent of the Pebble Beach Concours, and we remain close friends (via email).

There are differences in emphasis, and it’s definitely the laid-back Florida-style event you want to visit, to chill out and just look at the amazing cars Bill manages to bring in each year. Just like Pebble Beach, Bill’s event raises millions for local charities, as well as giving virtual Castrol R for the veins of obsessive car enthusiasts who flock to the event.

On the west coast, Pebble Beach is held on the Sunday of what is now ‘Monterey Week’ – six days of car-focussed events that sate the appetites for enthusiasts not only in the United States, but the world over. The Pebble Beach Concours creates millions of memories, and also millions of dollars for local charities.

That’s one of the things I truly admire about American social events, and that’s the emphasis on using such events to solicit donations from the many well-heeled attendees who flock to these iconic gatherings. The level of social and community commitment by these two events is really impressive. 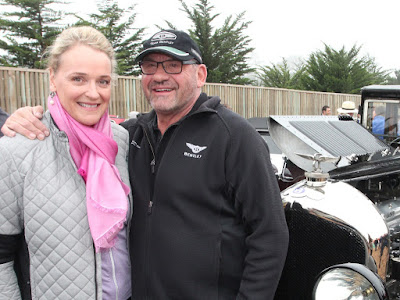 Since 2006 Pebble Beach has been run by an amazing woman and a dear friend, Sandra Kasky, ably supported by her husband, Martin Button. Sandra might be the person who creates ‘The Event’; but it’s Martin who is charged with importing rare, and invaluable, historic cars, to the Concours via his global vehicle transport and logistics company.

These two are a true tour-de-force, because between them they devote so much energy, passion and determination you don’t ever want to miss Monterey Week, and the Sunday finale.

As I said, 2010 was the last (and probably final) time I attended, and at Pebble Beach there were so many great memories created. It was the 75th anniversary of Jaguar Cars; Alfa Romeo was the chosen marque to be highlighted, and I had the pleasure of breakfast with my good friend, Ulrich Bez (then Chairman and CEO of Aston Martin), plus lunch in a group with former California Governor Arnold Schwarzenegger in the Bentley hospitality suite. 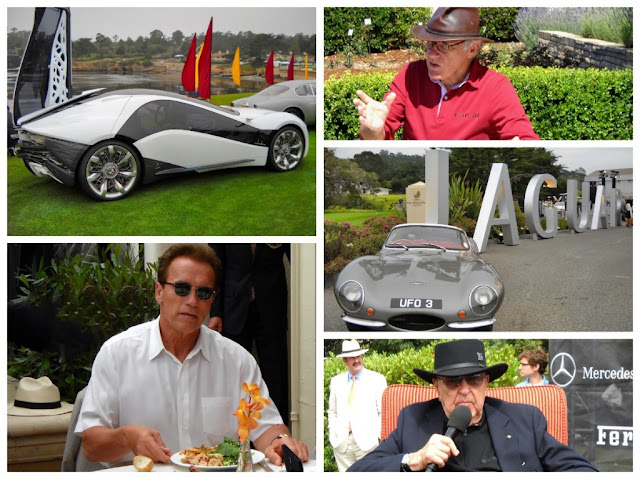 Later I enjoyed sitting in on an interview with the great Carrol Shelby at ‘The Quail – A Motorsports Gathering’ at Quail Lodge resort. 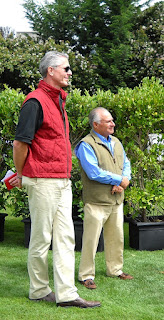 Speaking of ‘The Quail – A Motorsports Gathering’ – it was the brainchild of wealthy enthusiast Sir Michael Kadoorie, but its execution is managed by his close friend (also a good friend of mine), Gordon McCall.
I would unequivocally call these two men a ‘Power Couple’.

Gordon (in red vest) stages his own event on the Wednesday night before Pebble Beach, at the Monterey Executive Airport, called the McCall Motorsports Revival; an event  I really look forward to, because it launches the week's activites.

It's put together by Gordon and his hard-working wife, Molly. 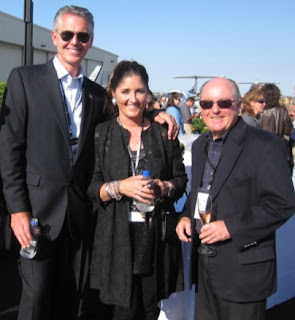 Then Gordon steps up for double duty as the organiser of Sir Michael’s ‘The Quail – a Motorsports Gathering’ on the Friday before Pebble Beach.
'The Quail' focuses solely on important cars in the motorsport scene, and is held (usually in brilliant sunshine) at The Quail Golf Resort in the Carmel Valley.
The Quail Resort is one of the most tranquil ways of strolling around one of the great automotive displays, spread out across the rolling green fairways, dining on exotic foods from a variety of 5-star food outlets, listening to the music of the Mariarchis. 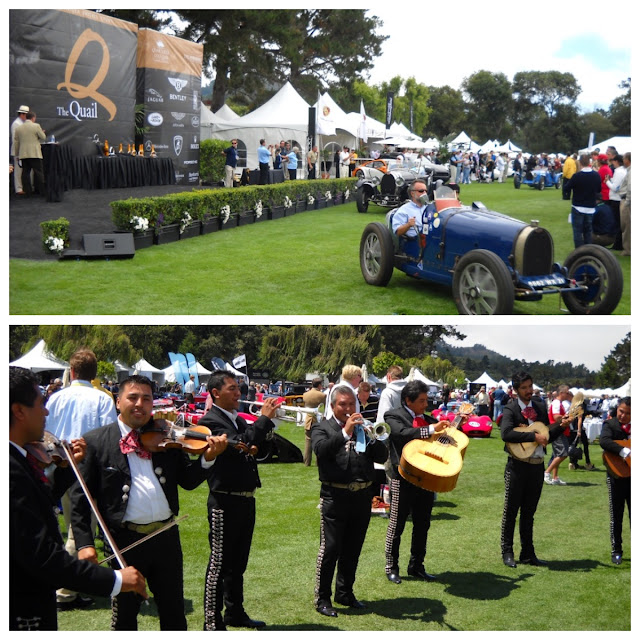 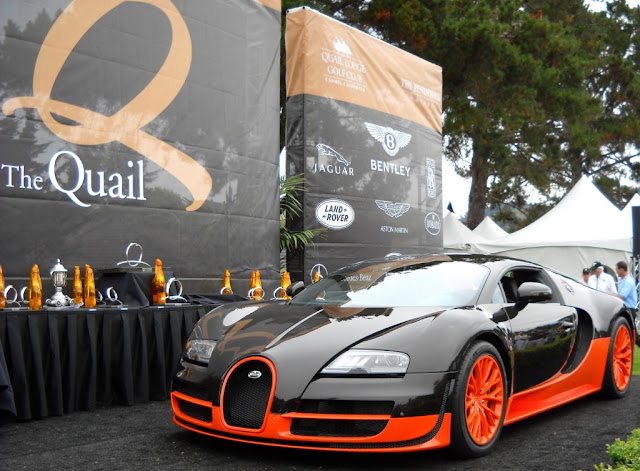 I so enjoyed attending these two events for many years, and with Castrol R still circulating through my veins, I can only lament that I will never again have the opportunity to attend two of the greatest motoring events on the international calendar, and stand with my close fiends. 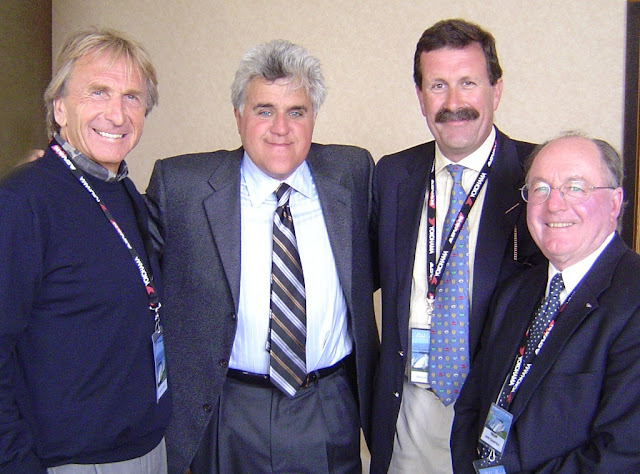 Of course, I recognise my immense good fortune being able to attend since 1990 and future years, which makes me one of the luckiest car enthusiasts in the world.

Posted by John Crawford at 9:34 AM