As you will have realised by now, I simply LOVE Italy, and it is by far my favourite country for touring. This GREAT DRIVE is an excellent starter for your first driving vacation in Italy.

It starts with with your arrival at Rome's Leonardo da Vinci airport, which used to be named after the city it's located in, Fiumicino - but the Italian Tourist Board figured it should have a flash name, so they settled on some famous artist to improve its status with travellers. 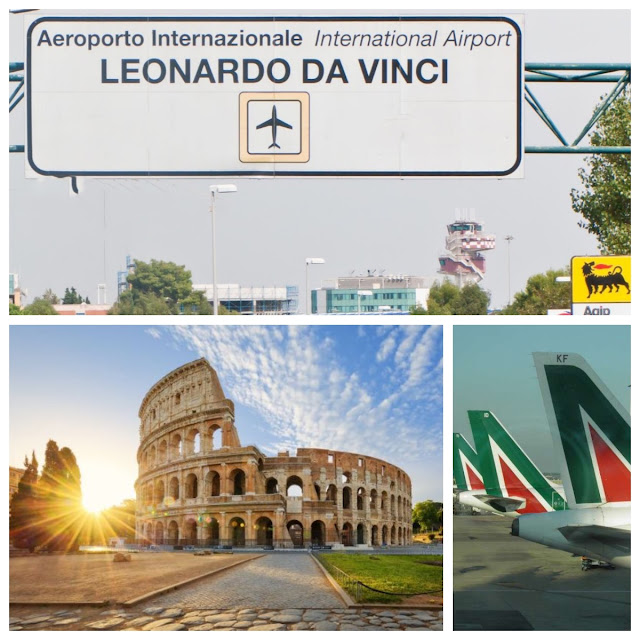 After years of experience, I think Europcar has the best rental car setup at FCO, with a pretty big fleet, and a wide variety of cars.

I have said I would not provide maps with my GREAT DRIVE stories, but in order to capture all the important locations, I've added maps by section.

So, we'll have Roma-Orvieto; Orivieto-Siena; then finally a long section from Siena to Firenze (taking in San Gimignano, Pisa and Lucca), before arriving in Florence. This is just a short section, because if you arrive at FCO early in the morning, you should be on the road by 9am, and will probably arrive in Orvieto in time for lunch. The total journey is around 175km, and should take just under three hours.

Orvieto is an ancient Etruscan city, on the southwest tip of what is now Umbria. Its hilltop location made it virtually impregnable, but it was annexed by Rome in 3BC. 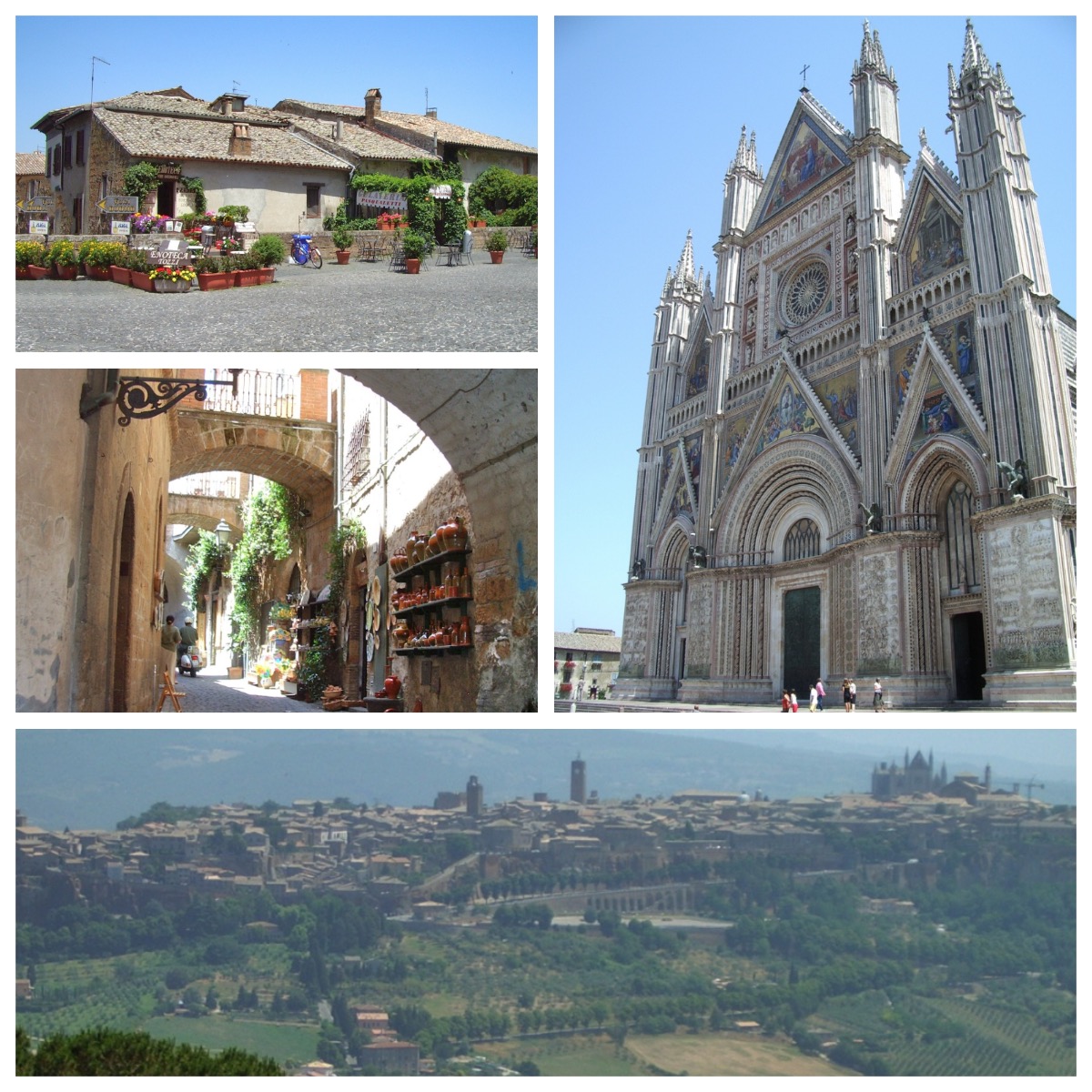 When you arrive, the town looks humble, and is dominated by a huge Duomo - because Orvieto was one of Papal Rome's most important centres. There are cool and shady streets and laneways off the main Piazza, and a number of small ristorantes and enotecas to have lunch.

The local Umbrian wine is excellent, and very often served in recycled wine bottles minus a label, and a loose cork jammed on top, but the cost will be less than 5 Euros. However, don't linger over more than a bottle, as the next section to Siena, on my route, follows a twisty regional road (SR2) north-west toward Siena, passing through Montalcino. The total distance is just 120km and should take just over two hours. 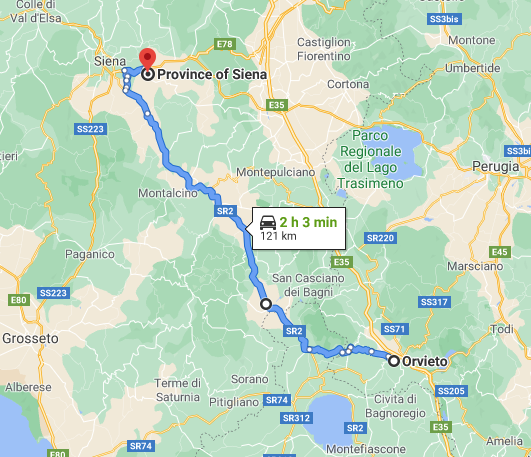 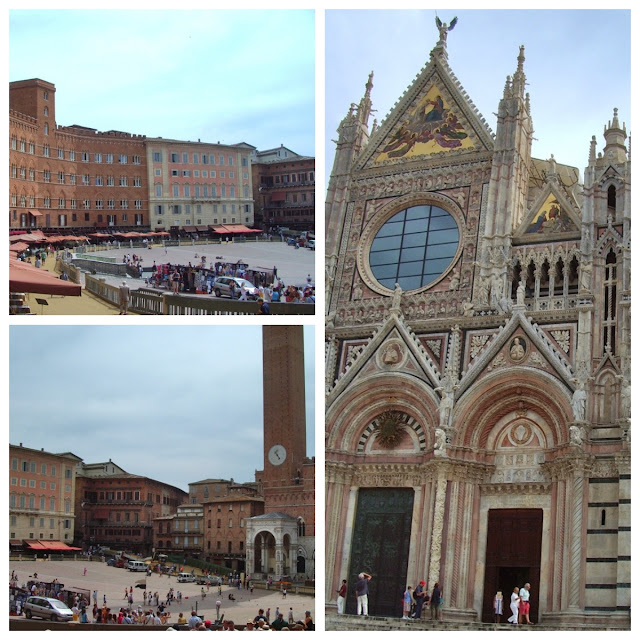 However, Siena is a beautiful medieval city, with so much to offer tourists. It has a fabulous range of hotels, but be warned. If you're driving make sure you definately book a parking space. Parking is expensive, and hard to get. My hotel had six rooms, but only two parking spots, so our FIAT Ritmo was squeezed next to a tiny Lancia! 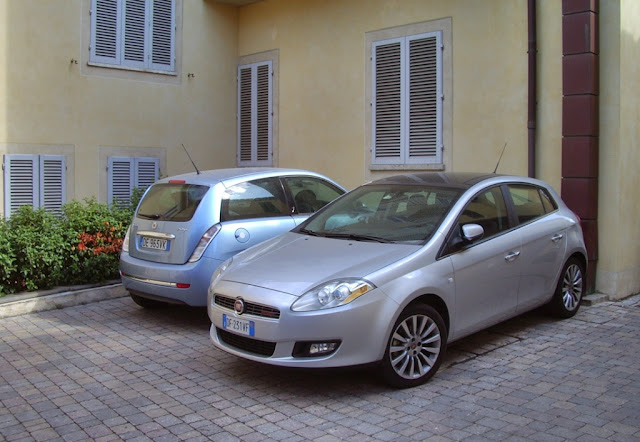 From Siena the next section is about 240km, which if you drove straight through would take less than three hours. However, it passes through some great locations, so maybe you should plan an overnight stop. 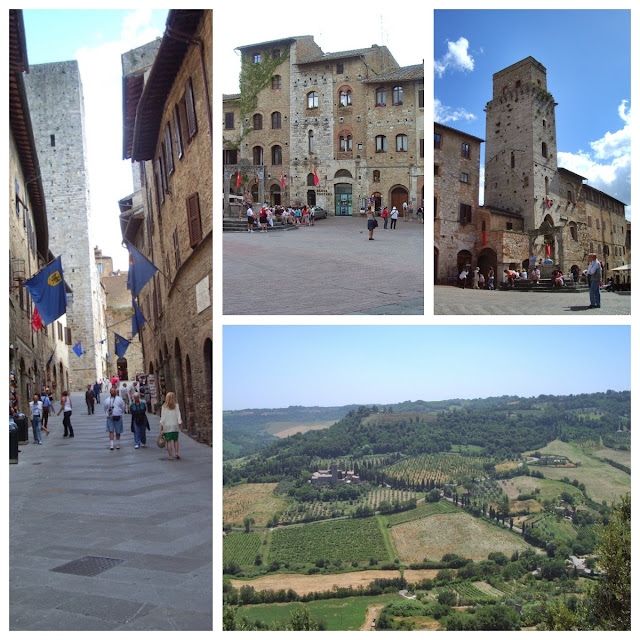 The first location after you leave Siena is San Gimignano (above), set among rolling hills and beautiful vineyeards, but apart from souvenir shop trinkets, it offers just a piazza with coffee shops and medieval landmark buildings.

I would make it no longer than a 30-60 minute pitstop, just to say you've been there. 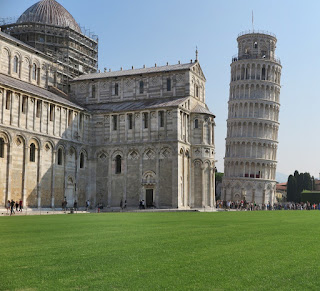 After that you'll reach Pisa, and quite frankly, apart from the Leaning Tower, I can't say that Pisa, as a city, held much interest.
It's full of tourists (maybe not now), and the sacred landmarks. No doubt you'll pause to snap the staged photos of you supporting the tower, but that's about all there is.

Next on this drive is the beautiful little city of Lucca. It's said to be Etruscan, but there is a lot of evidence that Ligurians settled on the location earlier. The original residents built humungous walls and battlements to repel invaders, which were never tested! The reputation of the wall's invincibility put off a lot of attacks on the city. 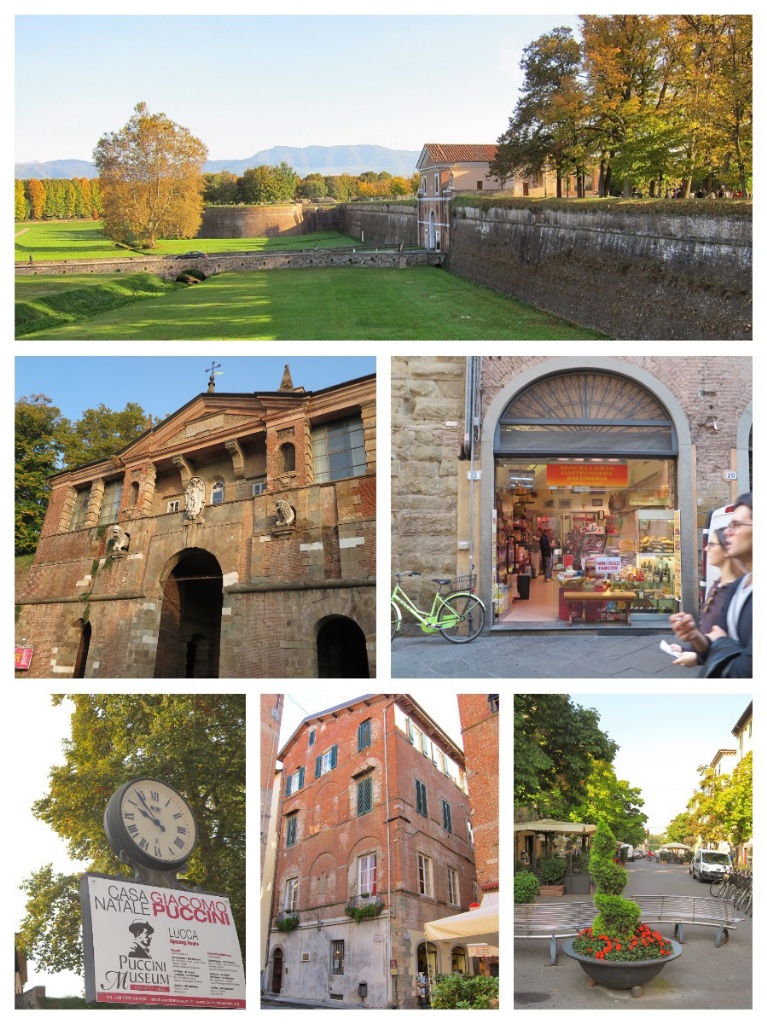 Lucca is the birthplace of composer Giacomo Puccini, and his house where he lived and worked is maintained as a museum in his honour (bottom row, centre). It's really a pedestrian-only town, with cool and shady streets.

The road atop the walls was named The Passeggiata delle Mura Urbane and is now a favourite circuit for walkers and joggers.

There's only a few accommodation places in Lucca, so if you want to pause overnight during the journey, I'd suggest staying in Pisa. 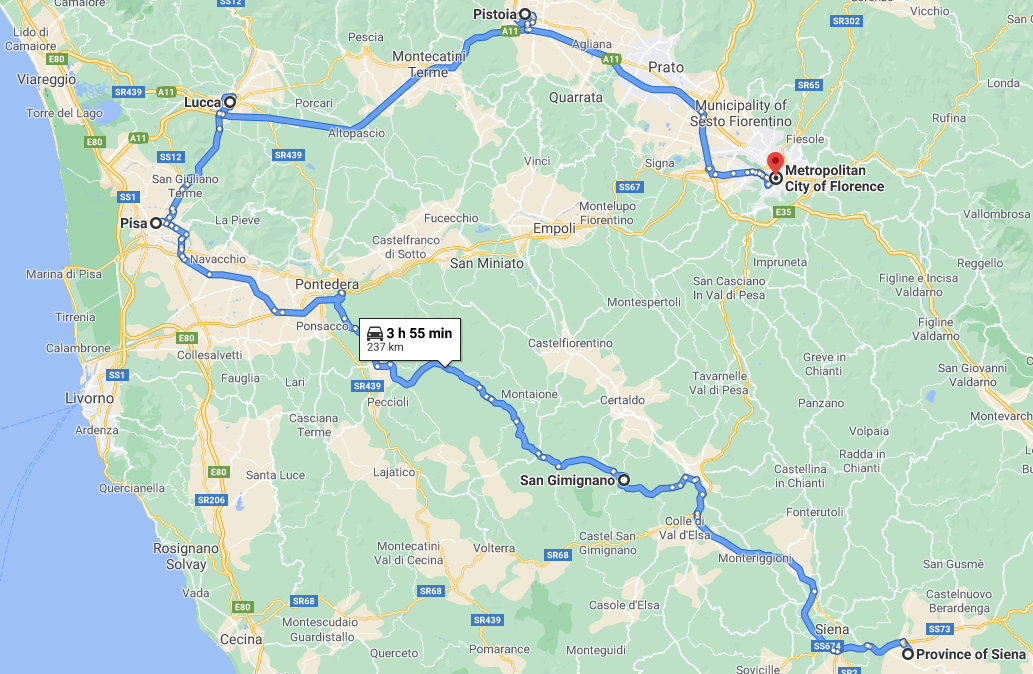 However, if you've made good time, push on through to Firenze where there is a wonderful selection of accommodation, and a city which I suggest should offer at least four days of activities.

Florence is a wonderful centre for the arts, and was governed by the Medicis for a very, very long time. Their patronage of the arts ensured they flourished, making Florence the centre of the Renaissance. 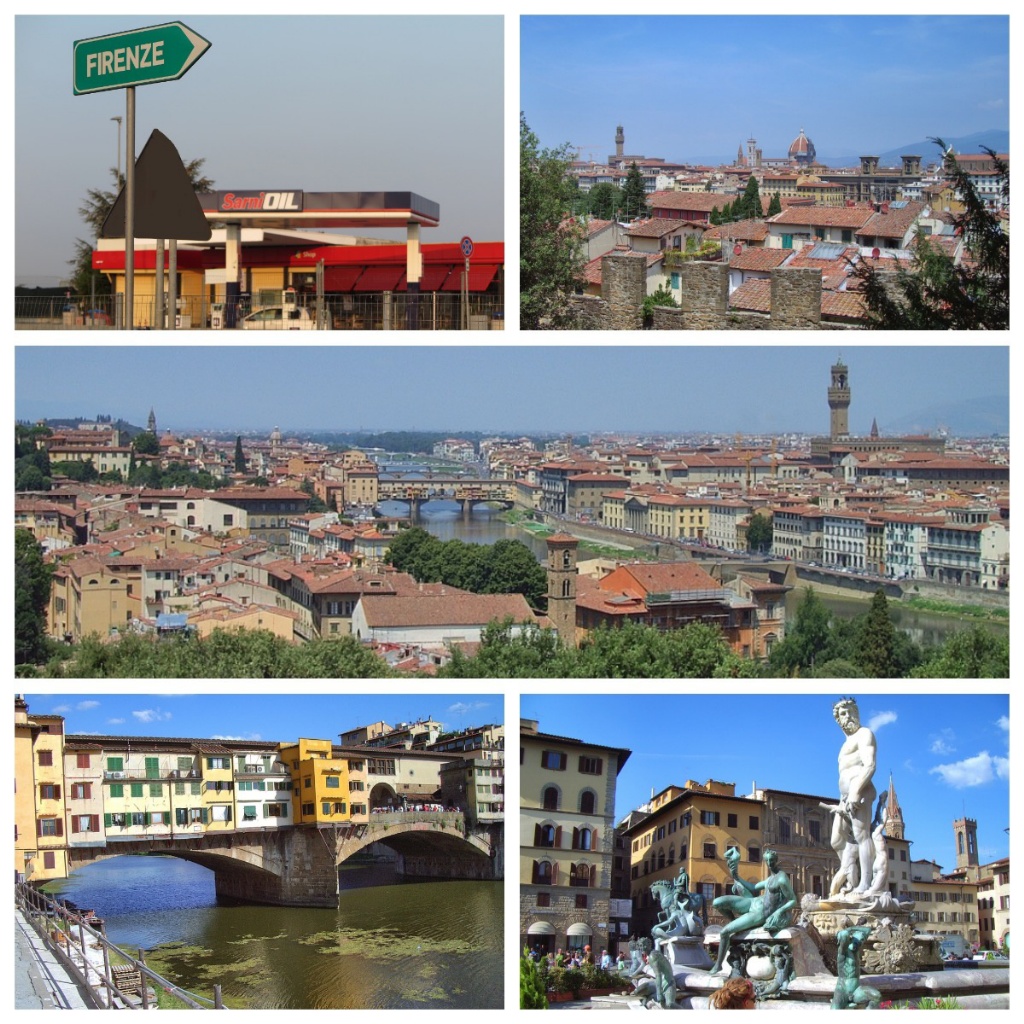 Make sure you walk from the city centre up to the Boboli Gardens, which is the highest point of the city, and the views over this truly important location for Italian art and culture are impressive.

After that, you're on your own, to plan the next leg of your journey, through this pleasant and ancient country. 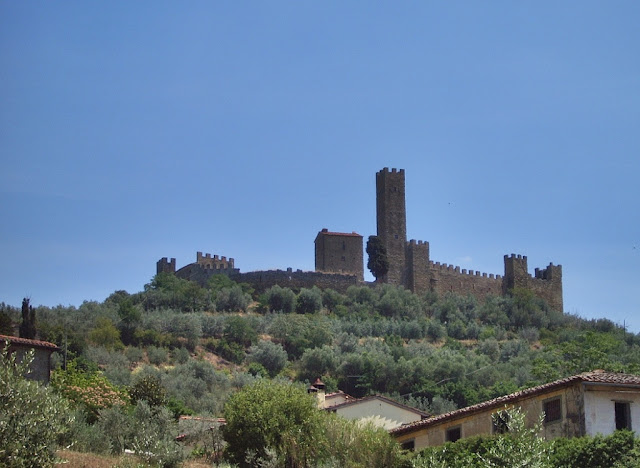